West Bengal's Chief Secretary HK Dwivedi asked officials to ensure that communal harmony is maintained in the state during the Durga Puja festivities. 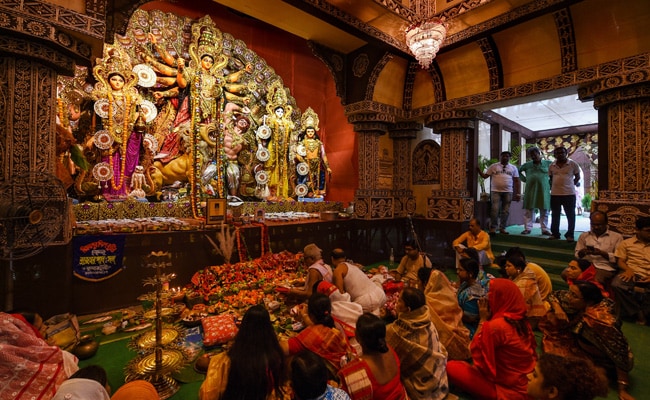 CCTV cameras and watchtowers have been made mandatory for large puja pandals. (File)

The West Bengal government has put the police on alert in view of the Durga Puja festivities in the state, citing terror threats.

Issuing a set of guidelines, Chief Secretary HK Dwivedi asked officials to ensure that communal harmony is maintained in the state.

All community puja committees were asked to engage an adequate number of volunteers in the pandals to keep vigil on the movement of suspicious persons and inform the police in case of any emergency.

CCTV cameras and watchtowers were made mandatory for large puja pandals, as per the guidelines.

The police were put on alert in view of the prevailing threats from terrorists and divisive groups to destabilise peace and harmony, leading to law and order problems during the ensuing festivities, it said.

Mr Dwivedi asked all the departments concerned to ensure that communal harmony is maintained in the state during the Durga Puja festival. "Special attention should be given to areas having mixed population and thickly populated areas as well as isolated places and vulnerable or sensitive regions."

The government also asked community puja committees to fix the date and time of immersion in consultation with the local police.

This year the state has allowed immersion of idols from October 15 to 18.

"Steps should be taken so that the festivities do not result in annoyance of local residents and people of other communities," the guidelines said.

The usual restrictions on the use of loudspeakers should be strictly followed, it said.

"The state Home Department must be informed of any untoward incident during the festivals forthwith," it added.