Raja Singh was referring to the Delhi case in which Aaftaab Poonawala murdered and butchered his live-in partner Shraddha Walker into 35 pieces. 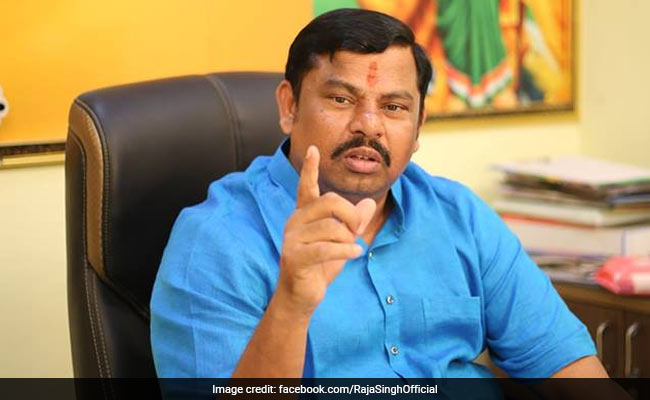 It has been alleged that Raja Singh on November 25, posted in Hindi on social media.

The Mangalhat police in Hyderabad has issued a show cause notice to suspended Bhartiya Janata Party MLA, T Raja Singh, for violating court-set norms after the BJP leader was found making provocative remarks against other religions despite a warning.

The Telangana High Court and the Commissioner of Police, Hyderabad, had ordered invocation of the Preventive Detention Act against the suspended lawmaker for habitually delivering provocative and inflammatory speeches, as per the notice issued by the Police Department on Tuesday.

It has been alleged that Raja Singh on November 25, posted in Hindi on social media that loosely translates to, "Akbar had Anarkali walled up because there was no fridge at that time. Even after years only their method has changed, not their mindset".

Raja Singh was referring to the Delhi case in which Aaftaab Poonawala murdered and butchered his live-in partner Shraddha Walker into 35 pieces.

According to the Mangalhat police show cause notice, "You have posted the photo under an objectionable caption targeting a particular community, which is a violation mentioned in the condition imposed by the High Court".

The order also mentions another post by Singh on December 6, which translated from Hindi, said: "Tribute to the martyrs' Ram Kothari and Sharad Kothari, and people who sacrificed their lives in Karseva on the day of bravery! Millions of salutes to all those Karsevaks on whose foundation of sacrifice, the Ram Janmabhoomi Temple in Ayodhya is taking shape with full grandeur".

While disposing of a writ petition involving Raja Singh, the high court in its order had stated, "In future, the detainee shall not make any provocative speeches against any religion or post any derogatory or offensive posts on any social media platforms like Facebook, Twitter, Whatsapp, Youtube, etc".

"Hence, you are hereby instructed to give your reply within two days from the receipt of this notice that why action can't be initiated against you for violating the conditions imposed by the Hon'ble High Court".

"Failure to comply with the terms of this notice can render you liable for taking legal action", the notice further reads.

Speaking on behalf of MLA Raja Singh, Advocate K Karunasagar while talking to the media stated, "Two notices have been issued to MLA Raja Singh by Mangalhat police. One is against the Twitter account, while another is with reference to the Shraddha Murder case on Facebook. We will give a suitable reply today (Wednesday) evening or tomorrow".

"There is no violation of the condition of the high court by MLA Raja Singh, as alleged by police. Notices are only colourable exercises of power by the Hyderabad police," alleged Advocate Karunasagar.