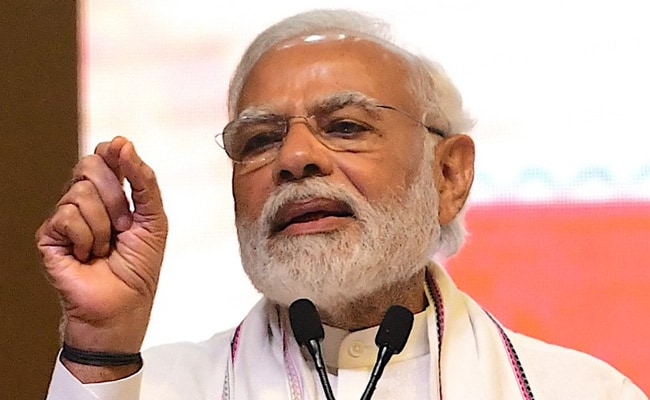 Prime Minister Narendra Modi will visit Bhimavaram in Andhra Pradesh on Monday during which he will launch the year-long 125th birth anniversary celebration of legendary freedom fighter Alluri Sitarama Raju.

He will also inaugurate Digital India Week 2022 in Gandhinagar on Monday, a statement issued by the Prime Minister's Office (PMO) said.

At around 11 AM on July 4, the Prime inister will launch the year-long 125th birth anniversary celebration of legendary freedom fighter Alluri Sitarama Raju in Bhimavaram, the PMO said.  Thereafter, at around 4:30 PM, he will inaugurate the Digital India Week 2022 in Gandhinagar, it said.

As part of Azadi Ka Amrit Mahotsav, the government is committed to giving due recognition to the contribution of freedom fighters and making people across the country aware of them, the statement said.

Born on July 4, 1897, Raju is remembered for his fight against the British, in order to safeguard interests of the tribal communities in the Eastern Ghats region.

He had led the Rampa rebellion, which was launched in 1922. He is referred to as “Manyam Veerudu” (Hero of the Jungles) by the local people.

The government has planned a series of initiatives as part of the year-long celebration.

To mark 100 years of Rampa Rebellion – the attack on Chintapalli Police Station that marked its beginning, the birthplace of Raju at Pandrangi in Vizianagaram district and the police station will be restored, the statement said.

The government has also approved the construction of Alluri Dhyana Mandir at Mogallu with a statue of Raju in Dhyana Mudra, depicting the life story of the freedom fighter through mural paintings and AI-enabled interactive system.

In Gandhinagar, the Prime Minister will inaugurate the Digital India Week 2022, whose theme is 'Catalyzing New India's Techade'.

During the programme, PM Modi will launch multiple digital initiatives aimed at enhancing accessibility of technology, streamlining service delivery to ensure ease of living and giving a boost to startups.

Prime Minister Modi will also launch 'Digital India Bhashini' which will enable easy access to the internet and digital services in Indian languages, including voice-based access, and help the creation of content in Indian languages.

The key intervention in building AI based language technology solutions for Indian languages will be the creation of multilingual datasets, the statement said.

Digital India Bhashini will enable massive citizen engagement to build these datasets through a crowdsourcing initiative called BhashaDaan, it said.

A total outlay of Rs 750 Crore has been envisaged for the scheme, the statement said.

This offering of India to the Global Public Digital Goods repository will help position India as the leader of building Digital Transformation projects at population scale, and prove to be of immense help to other countries which are looking for such technology solutions, the statement said.

The Prime Minister will dedicate to the citizens 'MyScheme' – a service discovery platform facilitating access to Government Schemes.

It aims to offer a one-stop search and discovery portal where users can find schemes that they are eligible for.  He will also dedicate to the citizens 'Meri Pehchaan' – National Single Sign On for One Citizen Login.

National Single Sign-On (NSSO) is a user authentication service in which a single set of credentials provides access to multiple online applications or services.

The Prime Minister will also announce the first cohort of 30 Institutions to be supported under the Chips to Startup (C2S) Programme.

The C2S Programme aims to train specialized manpower in the area of design of semiconductor chips at Bachelors, Masters and Research level, and act as a catalyst for growth of Start-ups involved in semiconductor design in the country, the statement said.

It offers mentoring at organisational level and makes available State-of-the-art facilities for design to the institutions. This is part of the India Semiconductor Mission to build a strong design ecosystem in semiconductors, it said.

Digital India Week 2022 will have physical events from July 4 to July 6 in Gandhinagar and it will celebrate the anniversary of Digital India while demonstrating how public digital platforms like Aadhaar, UPI, Cowin, Digilocker etc., have enabled ease of living for citizens.

It will showcase India's technological prowess to the global audience, explore collaboration and business opportunities with a wide range of stakeholders, and present the Techade of opportunities for NextGen, the statement said.

It will witness participation of startups and leaders from government, industry and academia. A Digital Mela is also being organised with over 200 stalls that will showcase digital solutions enabling ease of living and also the solutions that have been developed by Indian Unicorns and Startups, the statement said.

Digital India Week will also have India Stack Knowledge Exchange in virtual mode from July 7 to 9.