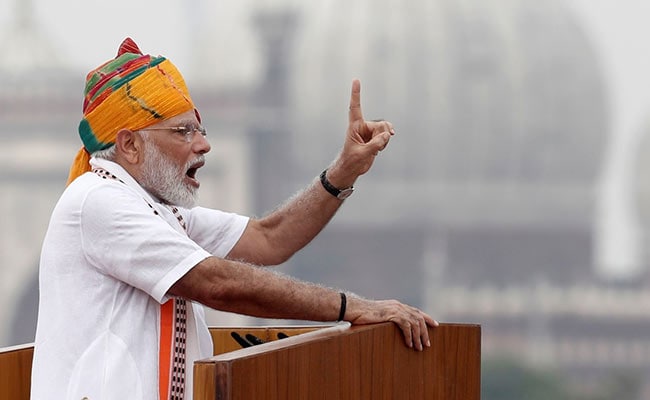 Prime Minister Narendra Modi will unfurl the national flag and deliver his seventh consecutive Independence Day speech from the iconic Red Fort this morning. The Prime Minister will receive the Guard of Honour contingent, comprising an officer and 24 men each from the Army, Navy, Air Force and Delhi Police, the Defence Ministry said in a statement.

There is strict social distancing and safety measures in place as the celebrations are happening amid the coronavirus pandemic.

The GoC Delhi will then conduct the Prime Minister to the "Saluting Base" where a combined inter-services and police guards will present a salute to him, after which he will inspect the Guard of Honour, the Defence Ministry statement said.

The Guard of Honour will be positioned directly in front of the national flag across the moat below the ramparts of the Red Fort.

This year, the Army being the coordinating service, the Guard of Honour will be commanded by Lieutenant Colonel Gaurav S Yewalkar.

The Army contingent in the Prime Minister's Guard will be commanded by Major Palvinder Grewal, the Navy contingent by Lieutenant Commander KVR Reddy, while Squadron Leader Vikas Kumar will lead the Air Force contingent and the Delhi Police contingent will be led by Additional Deputy Commissioner of Police Jitender Kumar Meena.

After inspecting the Guard of Honour, PM Modi will proceed to the ramparts of the Red Fort where he will be greeted by the Defence Minister, Chief of Defence Staff General Bipin Rawat, Chief of Army Staff General MM Naravane, Chief of Naval Staff Admiral Karambir Singh and Chief of Air Staff Air Chief Marshal RKS Bhadauria.

The GoC Delhi will conduct the Prime Minister to the dais on the rampart to unfurl the national flag.

After the tri-colour is unfurled by PM Modi, the National Guard will give "Rashtriya Salute" to the national flag, the statement said.

The unfurling of the flag will synchronise with a 21 gun salute fired by the gunners of the elite 2233 Field Battery (Ceremonial). The ceremonial battery will be commanded by Lieutenant Colonel Jitendra Singh Mehta and the Gun Position Officer will be Naib Subedar Anil Chand.

The National Flag Guard comprising 32 men and one officer each from the Army, Navy, Air Force and Delhi Police will present "Rashtriya Salute" at the time of unfurling of the national flag by the Prime Minister.

Major Surya Prakash from the Army will be in command of this Inter-Services Guard and Police Guard. The Naval Contingent for the National Flag Guard will be commanded by Lieutenant Commander Vivek Tingloo, Air Force contingent by Squadron Leader Mayank Abhishek and Delhi Police contingent by Additional Deputy Commissioner of Police Sudhanshu Dhama.