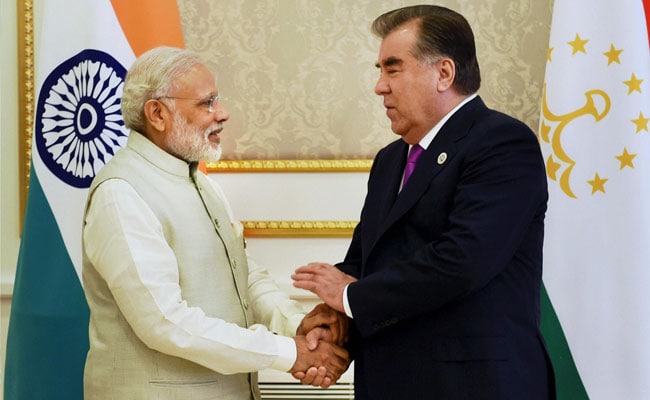 The prime minister held the meetings on the sidelines of the annual summit of the Shanghai Cooperation Organisation (SCO) in Uzbekistan capital Tashkent.

In the meeting between PM Modi and President of Belarus Alexander Lukashenko, both leaders reviewed diverse aspects of the bilateral ties and emphasised the need to take relations to new heights.

"During the meeting, the two leaders discussed the anniversary of 25 years of diplomatic relations between India and Belarus focusing on all the different spheres of bilateral ties.

"The two sides emphasised the need to take relations to new heights. The diversification of trade, encouraging the possibility of Indian investments in potash mines in Belarus and collaboration in the field of science and technology particularly by drawing on the talent of the youth were priority areas of discussion," External Affairs Ministry Spokesperson Vikas Swarup said.

In the meeting between PM Modi and President of Tajikistan Emomali Rahmon, it was decided to celebrate the 25th anniversary of the establishment of bilateral relations in a manner "befitting" the strong bonds between the two countries.

"They spoke of the intensification of trade and economic linkages, working towards better connectivity between the two countries and of ongoing security cooperation. The yearly celebration of the International Day of Yoga was a special item of discussion," said Mr Swarup.

Earlier, PM Modi attended the SCO summit where he said the partnership between India and the grouping will help protect the region from threats of radicalisation, violence and terror and drive its economic growth.