PM Modi's maiden formal meeting with his Israeli counterpart Naftali Bennett came after their brief interaction on Monday during the climate conference. 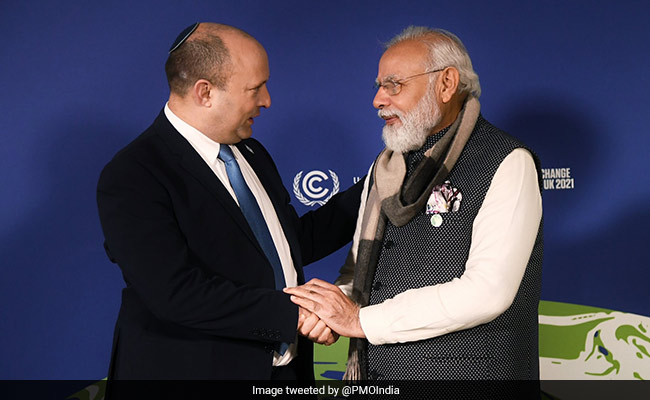 PM Modi said the people of India deeply value the friendship with Israel.

Prime Minister Narendra Modi had a "fruitful" first meeting with his Israeli counterpart Naftali Bennett on the sidelines of the COP26 climate summit in Glasgow on Tuesday during which they reviewed the bilateral ties besides exchanging views about expanding cooperation in areas of high-technology and innovation.

PM Modi and Bennett's maiden formal meeting came after their brief interaction on Monday during the climate conference.

Earlier, recalling their brief meeting on Monday, PM Modi said that the people of India deeply value the friendship with Israel.

"Enhancing friendship with Israel. Prime Ministers @narendramodi and @naftalibennett had a fruitful meeting in Glasgow. Both leaders discussed deepening various avenues of cooperation for the benefit of our citizens," the Prime Minister's Office tweeted.

Prime Ministers @narendramodi and @naftalibennett had a fruitful meeting in Glasgow. Both leaders discussed deepening various avenues of cooperation for the benefit of our citizens. pic.twitter.com/QnzdCmgijT

"Furthering ties with our Strategic Partner. PM @narendramodi met PM of Israel @naftalibennett in Glasgow today," the Ministry of External Affairs (MEA) said in a tweet.

Furthering ties with our Strategic Partner.

In their first such engagement, the two leaders reviewed our bilateral ties and discussed expanding cooperation in areas of high-technology & innovation. pic.twitter.com/7gUPSlHZGM

"In their first such engagement, the two leaders reviewed our bilateral ties and discussed expanding cooperation in areas of high-technology & innovation," it said.

Later in a brief statement, the MEA said that the two leaders reviewed bilateral strategic partnership and expressed satisfaction over the progress made in diverse sectors.

"They agreed on further expanding cooperation, especially in the areas of high-technology and innovation," it said.

Recalling that next year would mark 30 years of the establishment of full diplomatic relations between India and Israel, PM Modi extended invitation to Bennett to visit India.

Prime Minister Bennett described the "deep relationship" between India and Israel as one coming from the heart and not being about interests and urged PM Modi to work together to take the bilateral ties to "a whole new level".

"On behalf of all Israeli citizens, we deeply appreciate this whole new approach that will go down in history as something that you brought about. So thank you," the Israeli premier said as per a communication from his media adviser.

Bennett also cited the "remarkable dynamics" between Indian and Israeli innovators during his days as an entrepreneur which he said helped shape his feelings.

"Indeed, my personal experience, to a great degree, shaped my feelings. As you recall, when I ran a hi-tech company, we merged with an Indian company - the two "I"s, India and Israel in Manhattan. In the office, there were a bunch of Israelis and Indians, and getting together created a remarkable dynamic of innovation. There's so much that we can learn from you," he noted.

Urging to carry forward the deepened cooperation between the two countries that started during his predecessor Benjamin Netanyahu, the Israeli prime minister vowed to bring the ties together to a new level.

"This is indeed what we seek to do. Our goal is to continue the wonderful path that you placed with my predecessor, and bring it to a whole new level, so we can ensure that our two nations work together on innovation, technology, space, security, agriculture, food technologies, and of course climate-related technologies," Bennett stressed.

PM Modi, who was accompanied by External Affairs Minister S Jaishankar, interacted with Bennett on Monday in a cordial brief meeting.

In a video tweeted by PM Modi, the two leaders were seen exchanging pleasantries during their animated discussion.

"Indeed! We shall continue working together for stronger bilateral ties and for a better planet," PM Modi said in a tweet on Tuesday.

"The people of India deeply value the friendship with Israel," he tweeted.

Prime Minister Bennett, in a tweet, said, "it was truly great to finally meet you, @NarendraModi."

The meeting between PM Modi and Bennett comes after Mr Jaishankar, during his visit to Israel last month, extended an invitation to the Israeli premier on behalf of PM Modi to visit India.

According to Israeli media reports, Bennett, who became prime minister in June this year, is likely to visit India next year.

India and Israel elevated their bilateral relations to a strategic partnership during the historic visit of PM Modi to Israel in July 2017.

Since then, the relationship between the two countries has focused on expanding knowledge-based partnership, which includes collaboration in innovation and research, including boosting the "Make in India" initiative.

"Delighted to get the opportunity to meet my friend, President Chan Santokhi of Suriname, a nation with which India has deep-rooted cultural linkages," PM Modi tweeted.