Prime Minister Narendra Modi celebratedhis 69th birthday in his home state where he took part in various activities including a visit to the Statue of Unity and the Sardar Sarovar Dam. 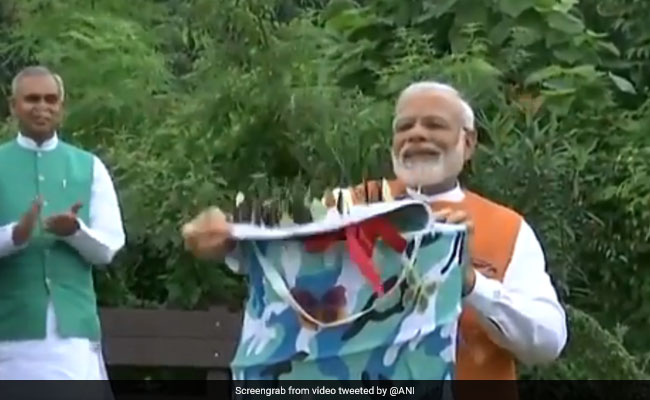 PM Modi released a large basket full of butterflies into a park in Gujarat's Kevadiya.

Prime Minister Narendra Modi released a basket of colourful butterflies this morning at a butterfly park in Gujarat. The Prime Minister celebrated his 69th birthday in his home state where he took part in various activities including a visit to the Statue of Unity and the Sardar Sarovar Dam on the Narmada river.

At the Butterfly Garden in Kevadiya in Narmada district, 193 km from Ahmedabad, the Prime Minister smiled as he released a large basket full of butterflies into the park. He named the saffron-coloured plain tiger butterfly as the state butterfly.

PM Modi also visited a cactus garden and the Ekta Nursery, near the Statue of Unity. The nursery manufactures various traditional eco-friendly products and offers a live demonstration of the manufacturing process to visitors. Later, he offered prayers at the Sardar Sarovar Dam site.

Earlier, before landing at Kevadiya, the Prime Minister did an aerial survey of Sardar Patel's statue which he had inaugurated last October. "Have a look at the majestic 'Statue of Unity', India's tribute to the great Sardar Patel," he tweeted.

He was greeted by a large number of people across the country, including leaders from across the political spectrum. Congress interim president Sonia Gandhi wished him a healthy, happy and long life. West Bengal Chief Minister Mamata Banerjee, Delhi Chief Minister Arvind Kejriwal and his Bihar counterpart Nitish Kumar too tweeted their birthday wishes.