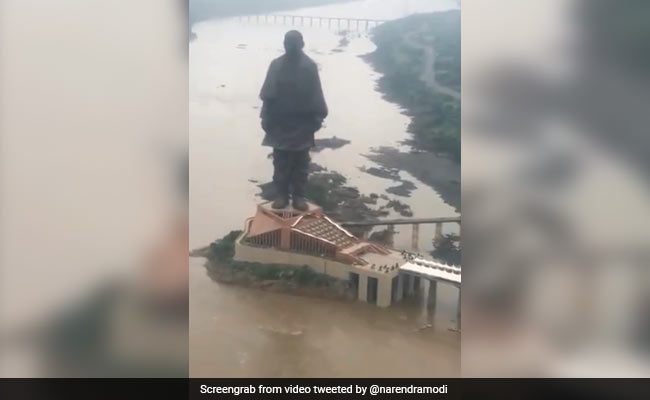 PM Modi tweeted a video of the Statue Of Unity.

Prime Minister Narendra Modi, who turns 69 today, visited the Statue of Unity on Narmada river in his home state Gujarat this morning and shared a video of the statue, billed as the tallest in the world. He also offered prayers at the river, which is often called the lifeline of Gujarat.

"Have a look at the majestic 'Statue of Unity', India's tribute to the great Sardar Patel," PM Modi tweeted, along with a video.

The statue was inaugurated by the PM Modi on Sardar Patel's birth anniversary on October 31 last year.

Reached Kevadia a short while ago.

Have a look at the majestic 'Statue of Unity', India's tribute to the great Sardar Patel. pic.twitter.com/B8ciNFr4p7

In a series of tweets, he shared pictures from the Jungle Safari area and Cactus Garden in the Kevadia area, where the Statue of Unity is located.

PM @narendramodi reviews tourism infrastructure at Kevadia. Here is a picture from the Jungle Safari area.

Come, visit this beautiful land which is home to the iconic 'Statue of Unity.' pic.twitter.com/OosdcS5k3v

Prayers to Maa Narmada, for the peace and prosperity of our nation! pic.twitter.com/9cuHpUf2Rv

PM Modi landed in Gujarat last night. He flew from Gandhinagar to Kevadia in Narmada district this morning to review programmes and projects including the Statue of Unity and the Sardar Sarovar Dam on the river Narmada.

PM Modi's visit comes as water levels in the Narmada dam, which he inaugurated in 2017, have reached the highest mark of 138.68 metres. Along with Chief Minister Vijay Rupani, he opened the "Namami Narmade Mahotsav" and offered prayers at the dam site to 'welcome' the water of river Narmada.

He also visited the Duttatreya Mandir in Garudeshwar village and a children's park. Addressing a public meeting at Kevadia, a town approximately 200 km from Ahmedabad, PM Modi said, "The 133-year-old Statue of Liberty gets around 10,000 visitors per day, about 8,500 people visit the 11-month-old Statue of Unity daily."

Last year, PM Modi celebrated his birthday by spending time with school children from his parliamentary constituency of Varanasi in Uttar Pradesh.