Arjun Meghwal, Who Started Out As A Telephone Operator, Back In PM's Team

Arjun Ram Meghwal was re-elected from the Bikaner parliamentary seat in the national election for the third time. 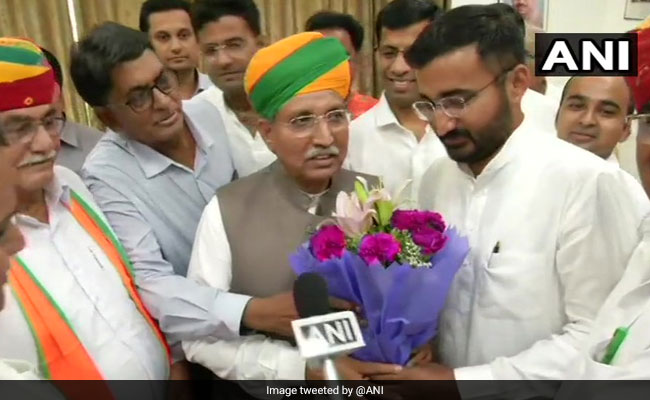 Arjun Ram Meghwal was a minister in PM Modi's cabinet in the previous government.

Arjun Ram Meghwal from Rajasthan, who was among the leaders who have received the call to be a party of Prime Minister Narendra Modi's new cabinet, was sworn in as Minister of State at PM's grand oath ceremony in Delhi today.

Arjun Ram Meghwal, 65, was the Minister of State for Parliamentary Affairs, Water Resource, River Development and Ganga Rejuvenation in PM's team during his first term as Prime Minister.

"I got a call. I thank Modi ji. I thank him for placing his trust in me. We have to make India a developed nation. The Prime Minister has called us for tea at his home. We will discuss the roadmap," Mr Meghwal told NDTV.

PM Modi and his team of ministers will be sworn in at the Rashtrapati Bhavan at 7 pm.

Mr Meghwal was among those who met BJP chief Amit Shah at his home on Wednesday night during the process to finalise the government portfolios.

The former IAS officer was re-elected from the Bikaner parliamentary seat in the national election for the third time. He secured over 6.5 lakh votes, defeating his cousin Madan Gopal Meghwal of the Congress. Veteran actor Dharmendra had represented Bikaner in 2004.

Mr Meghwal has had a remarkable career growth. After his studies, he started preparing for competitive examinations and got into Indian Post and Telegraph Department as a telephone operator.

Mr Meghwal entered politics in 2009 after resigning from the Indian Administrative Services.

In 2014, he defeated the Congress's Shankar Pannu by over 3 lakh votes.

He is seen as the BJP's face of the reserved castes in Rajasthan and has faced the challenge of having to deal with the infighting within the party in the state.

In 2009, Mr Meghwal defeated the Congress candidate with an overall margin of over 19,000 votes.