PM Modi Visits Party Office From Where He Operated Initially

During his speech earlier at JP Chowk outside the office, PM Modi recalled he spent his initial days in the party at the Khanpur office. 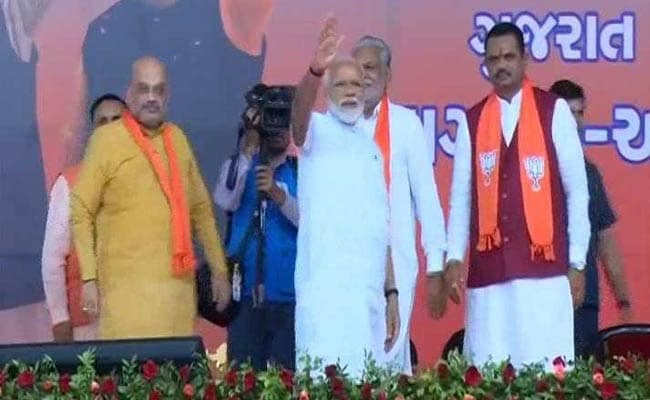 PM Modi is visiting his home state after the Lok Sabha poll results were announced.

After leading the BJP to a stupendous victory in the Lok Sabha polls, Prime Minister Narendra Modi Sunday evening visited the Khanpur office of the party in Ahmedabad and recalled how he "learnt a lot sitting in a small room" there.

He spent around twenty minutes inside the office.

PM Modi is visiting his home state after the Lok Sabha poll results were announced.

During his speech earlier at JP Chowk outside the office, PM Modi recalled he spent his initial days in the party at the Khanpur office. The organisational skills he learnt sitting in a small room in this office prepared him for bigger responsibilities, he said.

"I remember that in 2012, after winning the Assembly elections, I had visited this place for a victory rally. I am coming here after seven years," he told the gathering.

"My entire life was spent in the office. Ashokbhai (a veteran BJP leader) used to order ''daal bara'' in the evening. And ''sing-chana'' (peanuts) would always be there on my table. Journalists would visit and we would have tea. There was no representative of newspapers or TV (from those times) who had not visited this place," he said.

"From here, I got the `sanskar'' of (learnt about the ways of) the organisation, imbibed organisational skills...learnt a lot sitting in a small room. I kept taking responsibilities that people gave me," he said.

State education minister Bhupendrasinh Chudasama recalled how in 1987 PM Modi, as a party general secretary, scripted its victory in the Ahmedabad municipal election.

"Narendra-bhai managed to win the entire civic body election for the BJP for the first time in 1987. He single-handedly made BJP win the corporation election," he said.

As a general secretary of the BJP, PM Modi lived in the Khanpur office for years, party veterans recalled.