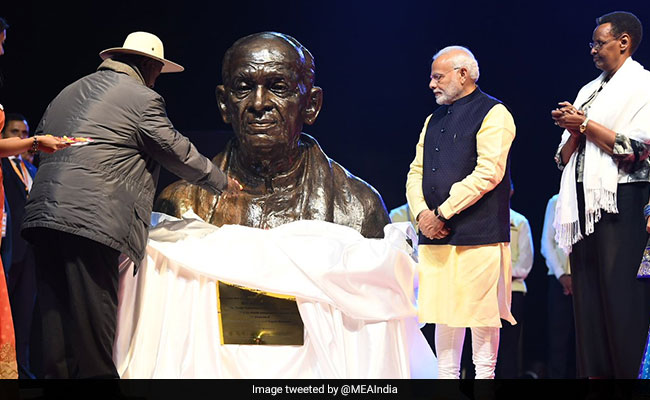 PM Modi unveiled a bust of Sardar Patel's and paid tribute to him.

In one of the photographs, PM Modi was seen bowing before Patel's bust and folding his hands as Mr Museveni looked on.

In another tweet, Mr Kumar said Indian community members turned out in large numbers to listen to PM Modi's address.

"The Indian community represents strongest & most durable economic & cultural link between India and Uganda," he said.

The Ugandan president remained present throughout the nearly 30-minute address of PM Modi and also spoke at the event.

"Ugandan President Museveni was effusive in his praise for the Indian community in Uganda. In his address at the community reception, he praised them for their hard work and contribution in the economic development of Uganda," the MEA spokesperson said on Twitter.

PM Modi arrived in Ugandan capital Kampala last evening on a two-day visit to the country - the first bilateral tour by an Indian prime minister since 1997.