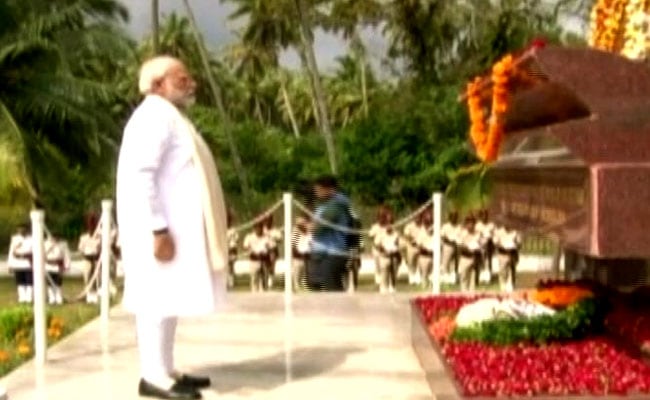 PM Modi started the day with a visit to Tsunami Memorial at Car Nicobar.

Prime Minister Narendra Modi on Sunday congratulated the people of Car Nicobar for overcoming the impact of Tsunami, which struck the Island in 2004, and said that the government is working to provide better facilities to the people in the Andamans.

"The people here has been demanding a solution to the problem of sea erosion for a long time. I am glad to announce that the government has decided to erect a sea wall to deal with the problem, the foundation of which will be laid today," he said.

The Prime Minister, who reached Andaman and Nicobar Islands on Saturday evening, has a number of events lined up today. Early this morning, the PM visited Tsunami memorial, which was built in memory of the the victims of the 2004 tsunami.

PM Modi will then meet tribal chiefs at the BJR Stadium. He is also expected to address a public meeting there, PM's party, the BJP, said.

The prime minister will also inaugurate an industrial training institute at Arong and lay the foundation stone for some infrastructure projects, news agency PTI said.

Later in the day, he will lay a wreath at the Martyrs Column at Port Blair and will visit the Cellular Jail in the city. PM Modi will hoist the high mast flag at South Point, Port Blair. He will pay floral tributes at statue of Subhash Chandra Bose at Marina Park in Port Blair, the statement said.

At the Netaji Stadium, the Prime Minister will release a commemorative postal stamp, coin and first day cover to mark the 75th anniversary of the hoisting of the tricolour on Indian soil by Subhash Chandra Bose.

He will also release the innovation and start-up policy for the islands.

The Prime Minister will inaugurate a 7 MegaWatt solar power plant, and solar village. He will also lay the foundation stone for a number of development projects and address a gathering, the statement said.