Rahul Gandhi's attack comes a day after he accused the Modi government of weakening the public sector company and destroying India's strategic capability. 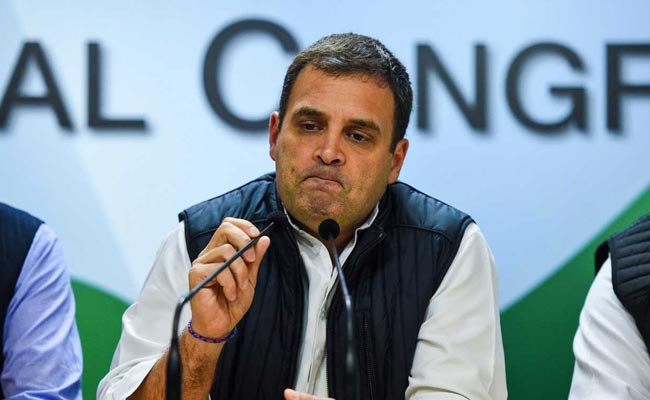 Upping the ante over state-run Hindustan Aeronautics Limited's reported cash crunch, Congress president Rahul Gandhi on Tuesday alleged that Prime Minister Narendra Modi paid Rs 20,000 crore to France's Dassault Aviation even though it has not delivered a single Rafale jet, but refuses to pay the dues of the Indian aerospace major.

Mr Gandhi's attack comes a day after he accused the Modi government of weakening the public sector company and destroying India's strategic capability to benefit industrialist Anil Ambani.
"The PM pays 20,000 Cr. to Dassault before a single RAFALE is delivered but refuses to pay HAL 15,700 Cr. it is owed, forcing it to borrow 1,000 Cr to pay salaries," Mr Gandhi tweeted.

"Meanwhile, the RM (Raksha Mantri) spins lie after lie but cannot answer my questions," he said.

Mr Gandhi also shared a video of his statement outside parliament on Monday following Defence Minister Nirmala Sitharaman's remarks dismissing "doubts" raised by the Congress on her statement on HAL.

Speaking to reporters outside parliament on Monday, Mr Gandhi had alleged: "The strategy of the government is - weaken HAL, do not give it money, destroy India's strategic capability and give the ''gift'' to Anil Ambani. That is the plan and that is what we are trying to thwart."

The Congress and the BJP-led NDA government have been involved in a war of words after a media report claimed that HAL, grappling with low finances, was forced to borrow Rs 1,000 crore to pay salaries to its employees, for the first time in years.

There was another report that claimed "not a single rupee of the said Rs 1 lakh crore has come to HAL, since not a single order, as claimed, has been signed till now".

The Congress has been targeting the government, alleging that it denied HAL an offset contract under the Rafale fighter jets deal with France, a charge the government has denied.

Mr Ambani has also rejected all such allegations.

On the other hand, the Bharatiya Janata Party-led National Democratic Alliance government has accused the Congress of not supporting HAL during its rule and asserted that the government is now strengthening the company.