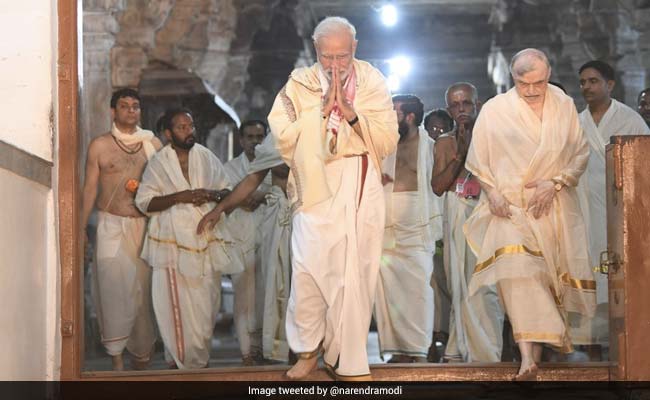 Prime Minister Narendra Modi on Tuesday offered prayers at the centuries-old Sree Padmanabhaswamy Temple, known as one of the 108 ''divyadesams'' of Lord Vishnu.

PM Modi, who entered the sprawling shrine through the eastern entrance, spent about 20 minutes there.

Earlier, while speaking at a function at neighbouring Kollam district, the Prime Minister said he would seek blessings of Lord Padmanabhaswamy for the "welfare of people of Kerala and other parts of the country". 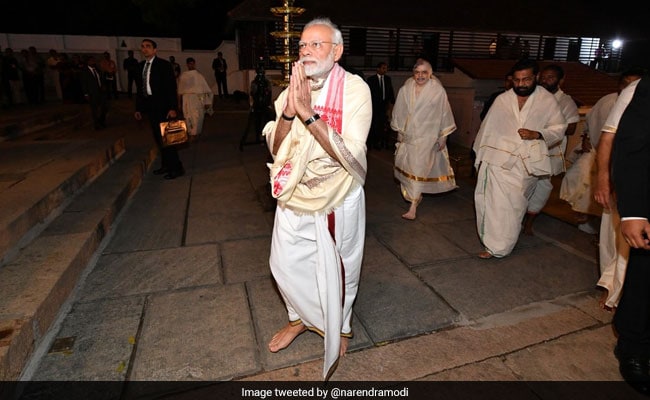 PM Modi entered the sprawling shrine through the eastern entrance

Before the darshan, PM Modi inaugurated the multi-crore developmental works carried out at the shrine as part of the union government's flagship Swadesh Darshan Scheme, which is aimed at developing the basic facilities in and around religious institutions across the country.

He unveiled at the east gate, a plaque on the project "Development of Spiritual Circuit: Sree Padmanabhaswamy Temple-Aranmula-Sabarimala", being implemented under the Swadesh Drashan Scheme of the union tourism ministry.

Chief Minister Pinarayi Vijayan, Minister of State for Tourism, Alphons Kannanthanam and Shashi Tharoor, legislator were among those present during the occasion.

People and party workers gathered on both sides of the road leading to the shrine to have a glimpse of the prime minister, officials said that under the Swadesh Darshan project, the Ministry of Tourism had sanctioned Rs 92.22 crores during 2016-17 and a majority of the work under this project was carried out at the Sree Padmanabhaswamy temple.

The construction of the heritage walk footpath, bio toilets and bathrooms, renovation of the Padmatheertham temple tank, electrification and setting up of security systems have been completed at the shrine, dedicated to Lord Padmanabha, under the initiative.

Recognising the tourism potential of the state,the Centre has sanctioned seven projects in Kerala under the Swadesh Darshan and PRASHAD schemes for about Rs 550 crore.

After the temple visit, PM Modi left for New Delhi. The centuries-old temple, dedicated to Lord Padmanabha, had hogged media attention in 2011 after its four underground cellars revealed gold ornaments, vessels, jewels and precious stones worth thousands of crores of Rupees during an inspection.

An architectural splendour in granite, the temple was rebuilt in its present form in the 18th century by the erstwhile Travancore Royal family, for whom Lord Padmanabha (Vishnu) is their family deity.