Arun Jaitley said it is easier to read a written speech where there is no chance of mistake, but difficult to speak extempore, though such speeches are often remembered by the audience. 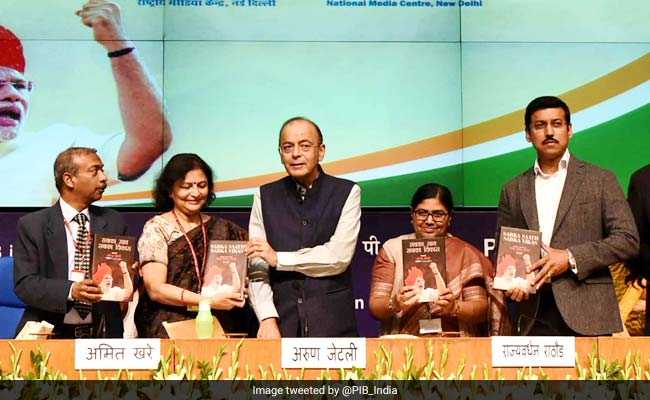 Releasing the book titled ''Sabka Sath Sabka Vikas'', a compilation of select speeches of PM Modi, Mr Jaitley said the prime minister in the past five years has shown his grip over a wide bandwidth of subjects and command over language.

Speeches of a Prime Minister are an indicator in history because they signify the direction the country was moving in that moment in time: I am sure the collection will be a great contribution in any library: Union Minister @arunjaitley#SabkaSaathSabkaVikaspic.twitter.com/ijQYR22wjU

The compilation of PM Modi's speeches was published by the ''Publications Division'' of the government.

"When you speak extempore, the bandwidth of subjects you must have a grip over has to be very wide.... Only a person who is a quick learner can acquire that bandwidth," he said, adding the prime minister's speech ought to be inspirational.

Observing that PM Modi is not fond of reading written speeches, the minister said the prime minister's speeches are heard carefully by the audience and even small errors are amplified and discussed.

Mr Jaitley said it is easier to read a written speech where there is no chance of mistake, but difficult to speak extempore, though such speeches are often remembered by the audience.

Minister of State (Independent Charge) for Information and Broadcasting Rajyavardhan Rathore said the compilation of speeches will be an "encyclopedia" for all people, young students, reseachers, academicians and journalists. "His (Modi's) experience of many years, we have tried to fit that into this book that we have put together with his speeches. I am sure you will find this book very useful," he said.