The monument was conceptualised by PM Modi during his tenure as Gujarat Chief Minister and he had laid the foundation stone for it in 2013. 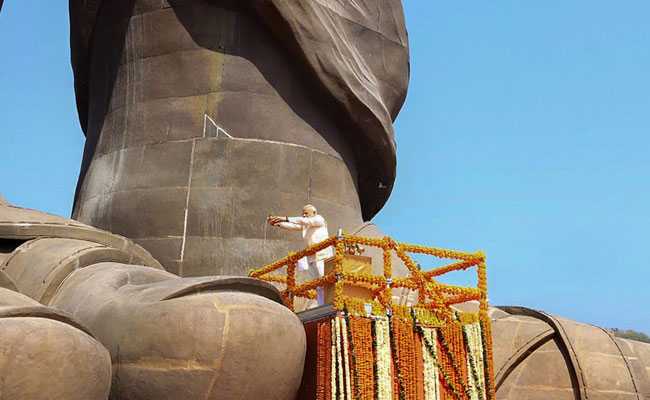 Prime Minister Narendra Modi on Wednesday inaugurated an imposing 182-metre statue of Sardar Vallabhbhai Patel here and said the world's tallest monument will serve as a reminder about his courage to thwart conspiracy to disintegrate India.

He used the occasion to slam those criticising the decision to build the monument, questioning whether any crime had been committed by constructing such memorials for national heroes like Patel.

The giant monument, named as the 'Statue of Unity' and built on an islet Sadhu Bet near Sardar Sarovar Dam in Gujarat's Narmada district, is twice the height of the Statue of Liberty in the US and taller than the 153-metre Spring Temple Buddha in China.

The monument was conceptualised by PM Modi during his tenure as Gujarat Chief Minister and he had laid the foundation stone for it in 2013. PM Modi said his government has taken up the cause of bringing to life the history and contributions of great personalities.

Sardar Patel, the first Home Minister of Independent India, is credited with merging 550 princely states into the Union of India. He had used force to annex princely states of Junagadh ruled by Nawab and Hyderabad ruled by nizam, both of whom had wished not to merge their states with the India union.

Wednesday's ceremony, which coincided with the 143rd birth anniversary of Sardar Patel, also known as the 'Iron man of India, was attended by Gujarat Governor O P Kohli, Chief Minister Vijay Rupani and BJP chief Amit Shah besides a number of other leaders hailing from Gujarat.

The function was marked by a flypast by Air Force planes and helicopters and a cultural show.

"The world's tallest statue would remind the entire world, the future generations about the courage, capabilities and resolution of the person who did this holy work of thwarting the conspiracy to disintegrate Mother India into pieces," the prime minister said addressing a gathering after inaugurating the monument.

"The statue will remind those who question India's existence, that this nation was, is and will remain eternal," PM Modi said.

The statue is conceived as a naturalistic depiction of Sardar Patel in characteristic garb in a walking pose and it rises out of a star-shaped, geometric base that covers the entire Sadhu Hill.

"This (statue) is a source of unity...with this sentiment we should march...and march with a dream to make the country 'Ek Bharat Shreshtha Bharat' (One India, Superior India)," he added.

PM Modi said his government has taken up the cause of bringing to life the history and contributions of great personalities.

"During the last four years, our government has set up many memorials of our national heroes, including this sky-high statue of Sardar Patel, his museum in Delhi, Dr. Bhimrao Ambedkar's Panch Tirth and a memorial dedicated to son of Gujarat's soil, Shyamji Krishna Varma," he said.

He then listed various other upcoming memorials and initiatives, such as Chhatrapati Shivaji's statue in Mumbai and a museum dedicated to Netaji Subhas Chandra Bose.

"But, to my surprise, some people of this country are seeing our movement through the political glasses. We are criticized for praising the contributions of national heroes like Sardar Patel. We are made to feel as if we have committed a serious crime," he said.

He then posed a question to the audience, "You tell me, is it a crime to remember our national heroes?"

To this, the audience replied in the negative. Congress president Rahul Gandhi attacked Modi over the event.

"Ironic that a statue of Sardar Patel is being inaugurated, but every institution he helped build is being smashed. The systematic destruction of India's institutions is nothing short of treason," he tweeted, shortly after the inauguration.

PM Modi, in his 55-minute speech, said, "It was the sentiment of crores of Indians that the man who united the country should get honour he deserved."

He said it was the responsibility of the people to give a befitting reply to the efforts "aimed at dividing the country".

The prime minister said if Patel had not united the country, the countrymen would have needed visas to see lions in Junagadh or pay homage at Somnath in Gujarat or view the Charminar in Hyderabad.

Remembering Sardar Patel's contribution, Modi said the great leader had "successfully foiled a conspiracy to divide India in to pieces".

The prime minister said Patel had a mix of diplomatic skills of Kautilya, a statesman and philosopher, and the valour of warrior King Shivaji in him.

Modi described the 'Statue of Unity' as a symbol of the country's engineering and technical capabilities.

He said his government is treading the path shown by Sardar Patel.

"We are expanding Sardar Patel's resolve of uniting the country by introducing various schemes, such as One Nation One Grid, eNAM and Bharatmala. Through such schemes of connecting the country, we are committed to make Ek Bharat Shreshth Bharat(One India Best India)" he said.

The statue has been built using over 70,000 tonnes of cement, 18,500 tonnes of reinforcement steel, 6,000 tonnes of structural steel and 1,700 metric tonnes of bronze, which was used for the outer cladding of the structure.

A viewing gallery has been created at a height of 135 metres inside the statue to enable tourists to have a view of the dam and nearby mountain ranges.

Hailing farmers, Modi said lakhs of them from across India came together, gave their tools, parts of their land in order to build the statue.

Modi also suggested the Gujarat government to set up a "virtual museum", near the statue, in the memory of all the erstwhile royals who had given up their states for a united India.

In his speech, Modi stressed that the statue would generate immense employment opportunities for the local tribals living near the dam in Narmada district.

"Tourism activities would also change the lives of locals here. This will also spread the indigenous knowledge across the world. I am confident that this statue will become a centre to improve agriculture as well as the lives of local tribals here," PM Modi said.

Modi had initially envisioned building of the statue by carving out a large rock near the dam.

"I visited the mountain ranges of this area to find a large rock which can be carved into a statue. After an intense search, I realized that the rocks are not strong enough. Thus, I changed my idea and came up with this thought (of building statue using concrete, steel and bronze)" said PM Modi.

After his speech, Modi walked upto the base of the statue and offered floral tributes to Sardar Patel. He also visited a museum built beneath the statue and a viewing gallery created at a height of 135 metres inside the statue.

A puja was also performed on the occasion.