The barbs from the Congress and PM Narendra Modi's critics came soon after, taking sharp digs at him and his government for, what they felt, should also have been on the top of his to-do list. 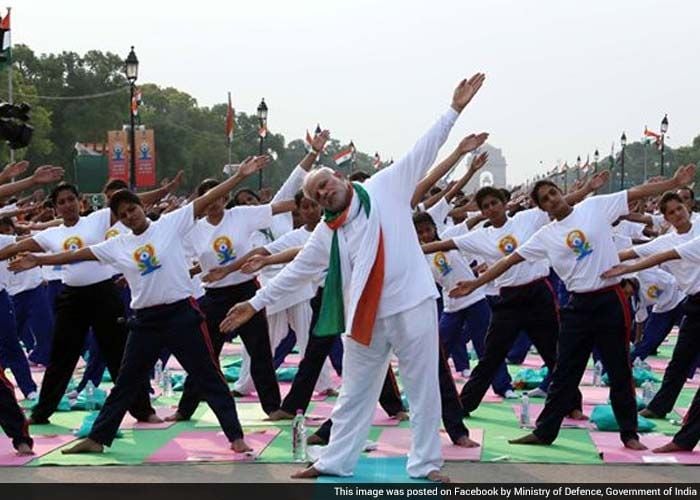 New Delhi: A 'fitness challenge' campaign started by sports minister Rajyavardhan Rathore on Twitter has been supported by thousands of people including celebrities, politicians and sportspersons. And there were a flurry of tweets Thursday morning when Prime Minister Narendra Modi joined the 'fitness challenge' and promised to put out a video how he kept himself fit. "Challenge accepted, Virat! I will be sharing my own #FitnessChallenge video soon," tweeted PM Modi, described by his sports minister as his inspiration behind the campaign "#HumFitTohIndiaFit".

The barbs from the Congress and his critics came soon after, taking sharp digs at PM Modi and his government for, what they felt, should also have been on the top of his to-do list.

Congress president Rahul Gandhi tweeted his fuel challenge to demand that the government reduce fuel prices while lawmaker Shashi Tharoor compared his silence over deaths in police firing in Tamil Nadu to his quick message expressing shock at a 2016 shootout in Colorado in United States and hurled a "compassion challenge" at him.

I look forward to your response.#FuelChallenge

Abhishek Singhvi, who led the Congress' offensive over the police killing 13 protesters, said he had a fitness challenge of a different kind. "Is the Tamil Nadu CM fit to continue?" he asked.

I look forward to your response.#FuelChallenge— Rahul Gandhi (@RahulGandhi) May 24, 2018

Rashtriya Janata Dal chief Tejashwi Yadav and Congress chief spokesperson Randeep Singh Surjewala had a longer list covering all topics on which they felt, the government had failed to deliver, right from giving farmers a better price for their produce and creating more jobs to blocking incursions by the Chinese in Arunachal Pradesh and elsewhere.

Another Congress spokesperson Sanjay Jha took on Twitter to attack Prime Minister on personal grounds challenging him to prove his educational qualification. "Dear Mr Modi, I am putting up my BA, MA and MBA degrees here. Are you ready for the #DegreeFitHaiChallenge? I await your response with high expectations," Mr Jha said.

The CPM's Sitaram Yechury did not throw a gauntlet at PM Modi, but packed in a jab. Mr Yechury called the fitness challenge a new show put up by the BJP to distract people from high fuel prices. "Modi's tryst with crude prices should remind us of that old dictum: You know who is swimming naked when the tide runs out," he tweeted.

The stinging jibes come at a time when PM Modi government completes its fourth year in office and is stepping into its last year before facing general elections next year to seek a fresh mandate. PM Modi's government enters its fifth year today.

The fitness challenge, started by Union minister and Olympian Rajyavardhan Rathore on Tuesday, has taken social media by storm. Virat Kohli, who was tagged by the minister, posted a video of himself doing 20 spider planks and tossed the challenge to three others including the Prime Minister.

Promoted
Listen to the latest songs, only on JioSaavn.com
Soon after Mr Rathore appealed to the people to get fit and fitter and posted photos and videos on his exercise regime to inspire others to follow his advice, the #fitnesschallenge went viral on social media with many celebrities from Bollywood, sports and politics including Prime Minister Narendra Modi, Superstar Amitabh Bachchan and tennis player Sania Mirza accepting the challenge.