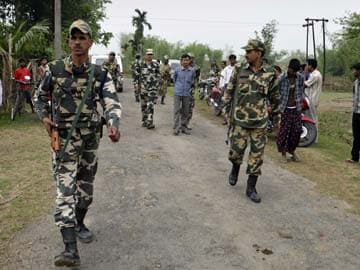 New Delhi: Prime Minister Manmohan Singh today condemned the "cowardly" terror attack in Assam that has claimed several lives and said the Centre will take all measures to maintain law and order and restore peace there. (Read full statement)

Dr Singh, who is keeping a close watch on the situation, spoke to Home Minister Sushil Kumar Shinde and Assam Chief Minister Tarun Gogoi and directed them to take urgent steps to restore normalcy in the disturbed areras, the Prime Minister's Office (PMO) said.

"Prime Minister Manmohan Singh has condemned the violence in Assam in which many a precious lives have been lost and a large number of people injured," the PMO said in a statement.

Dr Singh expressed "shock and grief" and said "such attacks are cowardly attempts to spread fear and terror among our citizens."

At least 27 people have been killed in violence unleashed by NDFB-Songbijit militants in Bodoland Territorial Administration Districts (BTADC) area in Assam.

Urging people to remain calm and ignore rumours, the Prime Minister said the central government and the state government will take all measures to maintain law and order and restore normalcy.

"The government stands committed to fighting terror in all its forms. The central government will assist the state government in taking all measures to defeat the forces of terrorism," the statement quoted him as saying.

"The people of Assam have been braving terrorist attacks with courage and fortitude in the past. They have voted in large numbers in the polling for the general elections and I am confident they will continue to fight terror resolutely," said Dr Singh who represents Assam in the Rajya Sabha and exercised his franchise there on April 24.

Earlier in the day, the Prime Minister was briefed by National Security Adviser Shiv Shankar Menon on the issue.