Taking a jibe at Prime Minister Narendra Modi who had visited the Kedarnath temple during the 2019 Lok Sabha polls and meditated there, former Uttarakhand Chief Minister Harish Rawat said today people are mediating in "caves built by us". 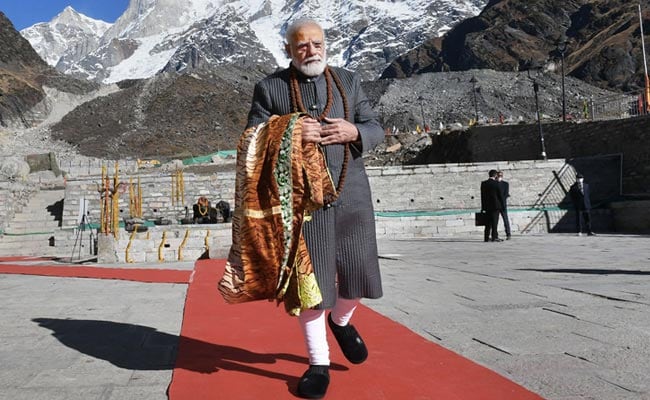 PM Modi had visited the Kedarnath shrine during the 2019 Lok Sabha polls and meditated there.

Taking a jibe at Prime Minister Narendra Modi over the development of the area around the Kedarnath temple after the 2013 disaster, former Uttarakhand Chief Minister Harish Rawat said today people are mediating in "caves built by us".

PM Modi had visited the shrine during the 2019 Lok Sabha polls and meditated there.

The PM had inaugurated a rebuilt samadhi of Adi Shankaracharya in Kedarnath and laid the foundation stone of reconstruction projects worth over Rs 400 crore there last month.

Addressing a rally held to launch the Congress Party's campaign for the Assembly polls at Parade Ground here, the former chief minister praised Rahul Gandhi, saying he was the only national leader to visit Uttarakhand after the 2013 disaster.

"You were the only national leader who came to Uttarakhand after the Kedarnath tragedy to wipe our tears. You went on foot to Kedarnath," Mr Rawat said.

"When I was made the chief minister in 2014, you told me the only responsibility being assigned to me was the reconstruction of the affected areas. And today people are meditating in the caves built by us at Kedarnath," Mr Rawat said without taking anyone's name. He also credited Gandhi with the success of the farmers' agitation against the three farm laws.

Mr Rawat credited his party with the withdrawal of the Devasthanam Board Act in Uttarakhand, saying it was against the autonomy of temples.

"If voted to power, we would create an Uttarakhand, free from unemployment, inflation and migration. We would also script a new chapter in women empowerment," Mr Rawat said.