The 88-year-old pontiff is in the ICU since he was hospitalised on December 20 after developing breathing difficulties. 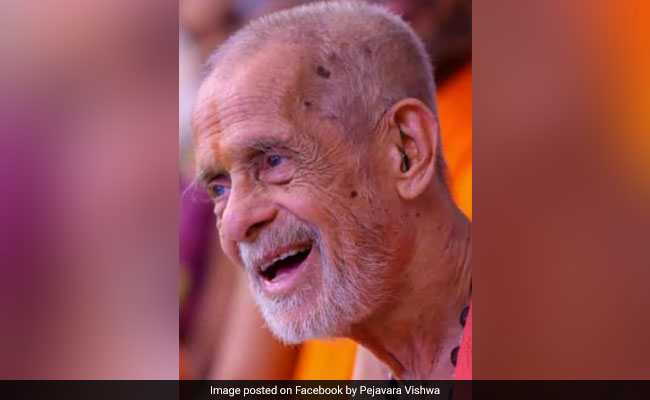 The health condition of the head of Pejavara Mutt Vishwesha Teertha Swamiji is very critical and there is a further decline in his condition, doctors said on Saturday.

The Pejavara mutt is one among the "Ashta" Mutts of Udupi.

Mutt officials and the junior pontiff Vishwaprasanna Teertha Swamiji said they have decided to shift the seer from the hospital to the mutt on Sunday as per his wishes, and the treatment would continue there.

"The condition of Shri Vishwesha Theertha Swamiji is very critical and there is a further decline in his health status. He remains unconscious and continues to be on life support. Tests have shown severe brain dysfunction," medical superintendent of Kasturba Hospital, Manipal, said in a health bulletin.

The 88-year-old pontiff is in the ICU since he was hospitalised on December 20 after developing breathing difficulties.

Doctors had earlier said the pontiff was being treated for extensive pneumonia.

The junior pontiff told reporters that "as per the seer's desire, he will be shifted to the mutt where arrangements are being made for his further treatment."

"Doctors are taking all efforts. According to the opinion of everyone that there are no signs of recovery, we have decided to shift our guru to the mutt on Sunday with the required life support system," he said.

With the seer's condition critical, Chief Minister BS Yediyurappa, who was touring the coastal region, rushed to the hospital.

Speaking to reporters after visiting the seer, Mr Yediyurappa said, "Pejavara seer's health is deteriorating every second, doctors are putting in all their efforts, their efforts are continuing. There is no improvement is what doctors are saying."

"We have left everything to Lord Krishna," the Chief Minister, who has decided to stay in Udupi on Sunday as well, said.

Senior BJP leader and former Union Minister Uma Bharti, who is a disciple of the seer, said she was praying for her guru's recovery.

Calling him a "rarest of rare" saint, revered by people from across sections of the society, Uma Bharti said, "For me, he is not only a guru but also like a father. I pray for his health because Swamiji is much needed for society."

"My guru is a karma yogi and he taught all of us to become karma yogis," she added.

Ms Bharti, who has been in Udupi for nearly a week now, had taken the Sanyasa Deeksha from the seer in 1992.