Parliament Winter Session 2021 Live Updates: The Winter Session began yesterday amid sloganeering by the opposition, who wanted discussion around the Farm Laws Repeal Bill, yet found it passed within 4 minutes with no debate. 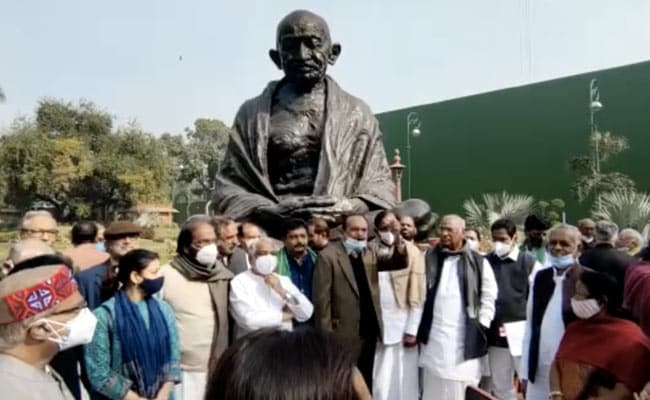 Winter Session 2021: Opposition protests at the Gandhi statue on the second day of the session. (File)

On the second day of the 25-day Winter Session of Parliament, 16 opposition parties met with Rajya Sabha Chairman Venkaiah Naidu to push back on 12 opposition MPs being suspended yesterday for the whole of Parliament's Winter session. The MPs were suspended by the House for exhibiting violent behaviour during the Monsoon session.

When their request to revoke the MPs' suspension was denied, opposition parties walked out of the Lok Sabha and Rajya Sabha, and have since been protesting at the Gandhi statue, much like they did yesterday.

The Winter Session of Parliament began on Monday amid protests and sloganeering by the opposition, who wanted discussion around the Farm Laws Repeal Bill, in an attempt to guarantee farmers some of their other demands that go beyond just the repeal of the three farm laws.

However, as the 25-day session began with 36 legislative bills on the agenda, the Lok Sabha promptly passed the Farm Laws Repeal Bill soon after the Winter Session convened, without providing the opportunity for discussion that the opposition was vying for.

Terming the repeal of the farm laws in Parliament a victory, farmer leaders from Punjab yesterday urged the Centre to decide on their other demands, including legal guarantee of minimum support price for crops, in today's session.

For the rest of the 25-day Winter Session, taking place over 19 sittings, other bills are expected to be passed, including the crucial Cryptocurrency and Regulation of Official Digital Currency Bill, the Insolvency and Bankruptcy (Second Amendment) Bill, and the Electricity (Amendment) Bill. The session is also expected to introduce one finance bill in addition to the 36 legislative bills.

Here are the Highlights on Parliament Winter Session 2021:

Sonia Gandhi and Rahul Gandhi will also be present.
Nov 30, 2021 15:07 (IST)
Lok Sabha to run smoothly from 3 pm after all-party meeting with Lok Sabha speaker
Lok Sabha Speaker Om Birla's efforts pay off as the deadlock in the House is broken. As per the in Mr Birla's all-party meeting, the House will now run smoothly from 3 pm. The Opposition will also participate in the proceedings of the House.
Nov 30, 2021 14:59 (IST)
New Bill on Cryptocurrency to be brought in after Cabinet approval, says Finance Minister in Rajya Sabha
The government will soon bring in a new Bill on cryptocurrency after it is approved by the Union Cabinet, said Finance Minister Nirmala Sitharaman today in the Rajya Sabha.
A Bill on Cryptocurrency and Regulation of Official Digital Currency for introduction in the Lok Sabha has been included in the Lok Sabha Bulletin-Part II, as part of the government business expected to be taken up during the ongoing winter session.
Nov 30, 2021 14:31 (IST)
Just In | Rajya Sabha adjourned for the day.
Nov 30, 2021 14:27 (IST)
Dam Safety Bill deferred due to absence of Opposition in session
The Dam Safety Bill has been deferred since the Opposition is not present, and we don't want to pass a bill without them as we are a democratic party, said Parliament Affairs Minister Prahlad Joshi in session today.
Nov 30, 2021 14:23 (IST)
"Why should we apologise?": Rahul Gandhi over MPs suspension row
"Why should we apologise? For raising needs of the public in Parliament? Absolutely not!" tweeted Congress leader Rahul Gandhi in Hindi, in response to the government's suggestion that the suspended opposition MPs should just apologise to the Speaker and the House for their
"misbehaviour" if they want to be reinstated to the Winter session of Parliament.
Nov 30, 2021 14:16 (IST)
Lok Sabha further adjourned till 3 pm due to disruptions
Lok Sabha is to function from 3 pm after the Speaker called for a meet of Lok Sabha floor leaders over disruptions.
For the second straight day, Lok Sabha proceedings were disrupted today amid Opposition protests over various issues.
As the House reconvened at 2 pm, there were protest from the members of the Opposition.
In less than two minutes, A Raja, who was chairing the proceeding, adjourned the House again till 3 pm.
Nov 30, 2021 13:59 (IST)
"Our two MPs will sit daily at the Gandhi statue in protest against their suspension": Trinamool
Trinamool Congress Parliamentary Party leader Derek O'Brien:
Starting 10 am to 6 pm from tomorrow, our two MPs - Dola Sen ad Shanta Chetri will sit daily at Gandhi Statue in protest against their suspension. They have been wrongly suspended by the Chair. We will invite other MPs to come and express their solidarity. The government is responsible for the disruption.
Nov 30, 2021 12:47 (IST)
"Bahubali tactics of majority rule", says Lok Sabha Congress Leader
Leader of Congress in Lok Sabha Adhir Ranjan Chowdhury today termed the suspension of 12 Opposition MPs from Rajya Sabha as the imposition of bahubali tactics of majority rule and alleged it was a threat to democracy.
"Have we seen a punishment being given for the wrongdoings of the last session's proceedings in the current session? There is a retrospective effect going on here. It is a new strategy of the current government to instill fear in us and use threats to take away our opportunities to present our side. We have never seen this retrospective effect in the Parliament before," the Congress leader said while speaking to media persons after staging a walkout from the Lok Sabha.
Congress, Dravida Munnetra Kazhagam (DMK) and National Conference were part of the staged walkout.
Nov 30, 2021 11:45 (IST)
Trinamool joins Opposition protest at Gandhi statue 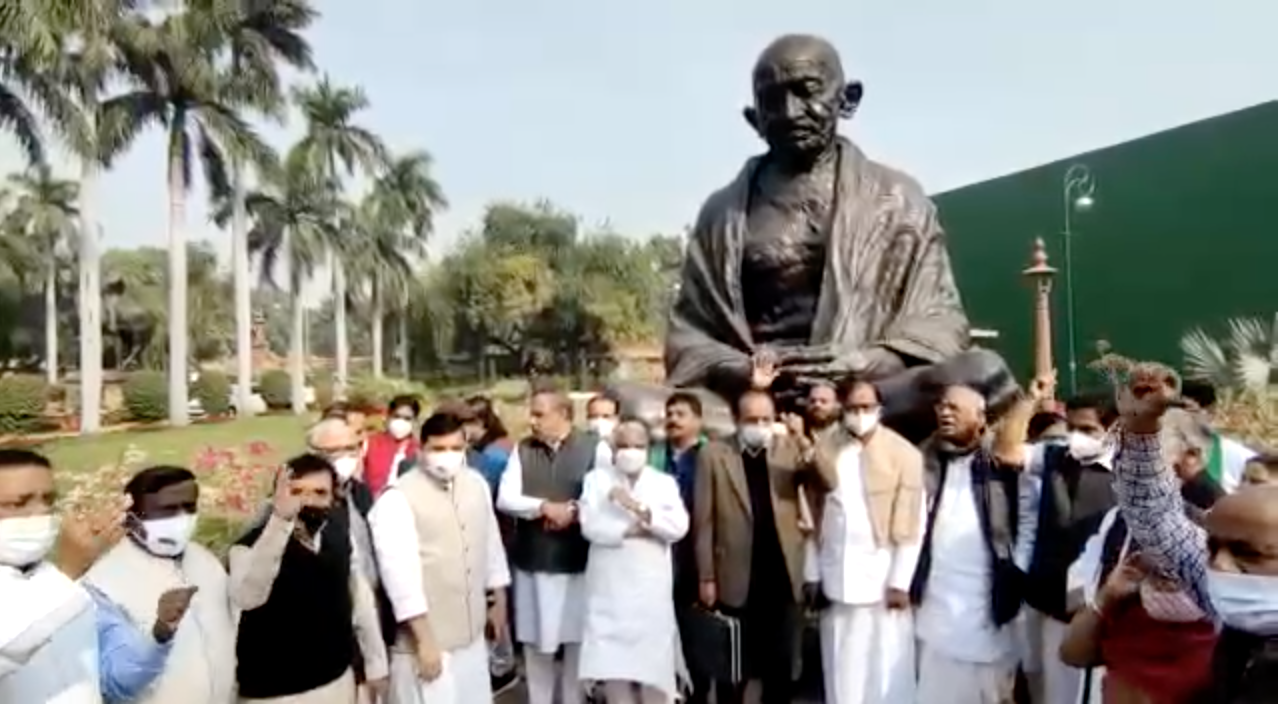 Nov 30, 2021 11:08 (IST)
Just In | Opposition Parties walk out of Lok Sabha over suspension of MPs.
Nov 30, 2021 11:02 (IST)
16 opposition parties to meet Rajya Sabha Chairman Venkaiah Naidu over suspension of MPs
16 opposition parties - not including the Trinamool Congress - are meeting Rajya Sabha Chairman Venkaiah Naidu today over the suspension of 12 MPs from the entirety of this Parliament session for "misbehavior" related to the last day of the previous session.
The 16 parties said that if the contentious suspension - which they have argued is against parliamentary laws, since the rules do not allow for punishments to be carried over into following sessions - is not revoked, they intend to boycott today's session of the Rajya Sabha.
The parties are the Congress, the DMK and MDMK from Tamil Nadu, the Shiv Sena, the NCP, the CPM and CPI, the RJD, the Indian Union Muslim League, the LJD, the National Conference, the RSP, Telagana's ruling TRS, the Kerala Congress and the VCK. Delhi's ruling Aam Aadmi Party is also on the list.
Yesterday (the first day of Parliament's Winter session), 12 Rajya Sabha MPs, including the Shiv Sena's Priyanka Chaturvedi, were suspended from this entire session for scenes of ruckus in August, when opposition MPs and the government were at loggerheads over the Pegasus scandal.
Nov 30, 2021 10:49 (IST)

Parliament Winter Session: Suspended MPs Should Apologise, Says Government, Opposition Pushes Back
The government was "forced" to suspend 12 opposition MPs from this Parliament session for "misbehaviour" - related to the events of August 11, the last day of the previous session - but will consider revoking the suspension if they apologise, Parliamentary Affairs Minister Pralhad Joshi said.
Mr Joshi tweeted this morning to also say the government planned to introduce "important bills" in the House in this session, and called on the opposition to "allow... a healthy discussion".
"To maintain dignity of the House, government was compulsorily forced to place this proposal of suspension... But if these 12 MPs apologise to the Speaker and House for their misbehavior, the government is ready to consider their proposal positively with an open heart," he said.
Nov 30, 2021 10:34 (IST)
15 parties attend Opposition meeting led by Congress 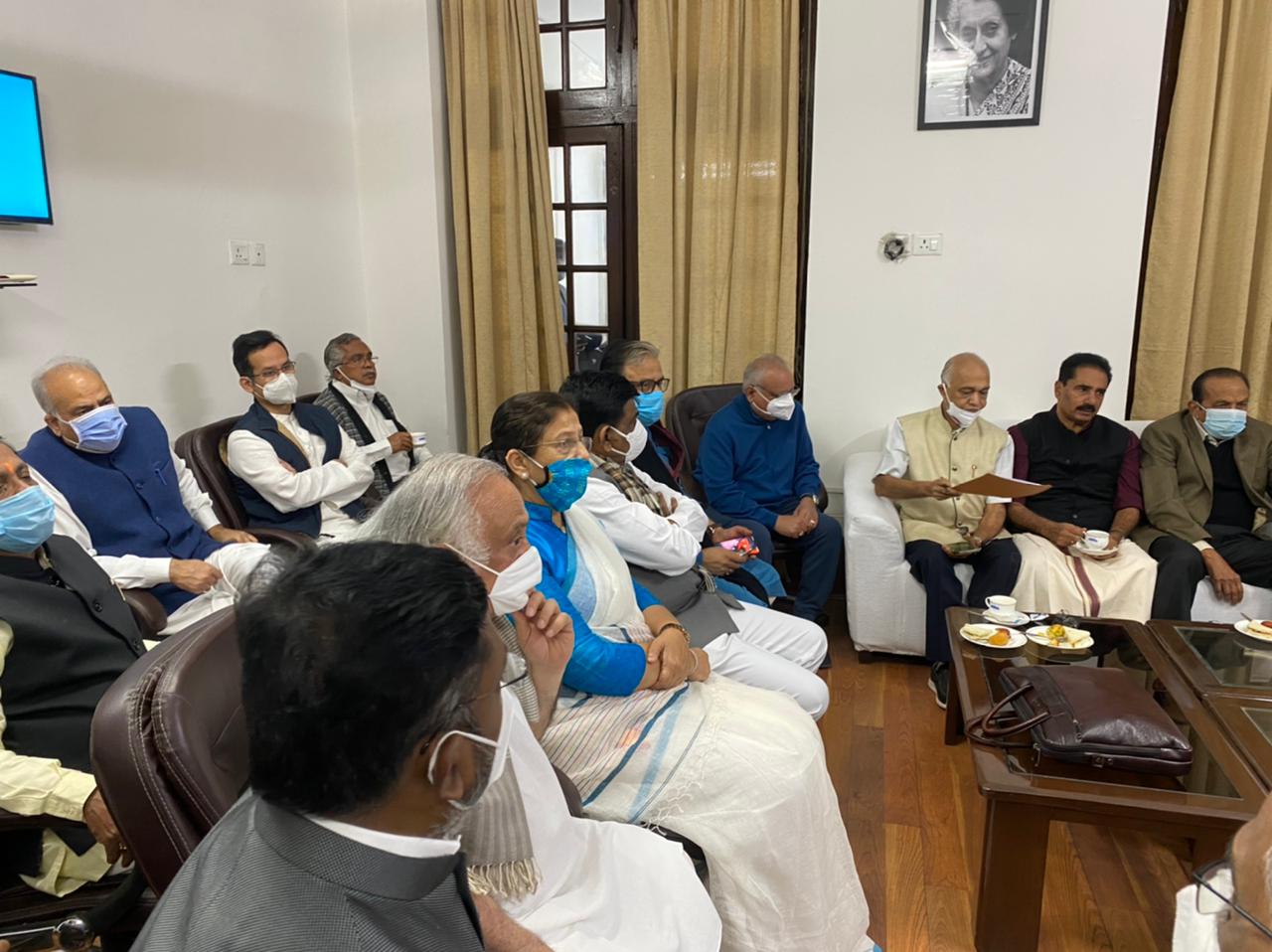 Nov 30, 2021 10:23 (IST)
Congress MPs moves notices in Lok Sabha and Rajya Sabha on farmers' issues, rising prices of essential commodities
Congress MP Manish Tewari today moved an adjournment motion in the Lok Sabha "to direct the government to create a record of farmers who lost their lives during farm laws protest and give compensation to their families" terming it as a matter of "urgent importance."
In tandem, Congress MP Deepender Singh Hooda also moved a suspension of business notice in Rajya Sabha demanding a discussion on legal guarantee for Minimum Support Price and aid to farmers who lost their lives during the protest.
In a different vein, Congress MP Manickam Tagore today gave an adjournment motion notice in Lok Sabha to discuss the rising prices of essential commodities across the country to direct the Government to take appropriate steps to reduce the excise tax on petrol, diesel, LPG to its 2013 level.
Nov 30, 2021 10:20 (IST)
Suspending MPs is "strangulating the voice of opposition": Leader of Opposition in Rajya Sabha
"Opposition parties are meeting today to discuss future course of action. The question of offering an apology doesn't arise. MPs were suspended against rules of the House. This action is like strangulating the voice of opposition": Leader of Opposition in Rajya Sabha Mallikarjun Kharge on the suspension of 12 MPs yesterday.
Nov 30, 2021 09:58 (IST)
Congress and Trinamool to hold separate opposition meetings at 10 am and 10:15 am respectively
Today, leaders of the opposition, led by Congress, will meet in the Rajya Sabha at Mallikarjun Kharge's office at 10 am, while a meeting of the Trinamool Congress MPs will be held at 10:15 am in their own office in the Parliament House.
The separate meetings serve the purpose of surrounding the government in the Winter Session but ensuring they are not seen together. Trinamool did not attend Congress's meeting on Monday either. Further, despite having similar objectives in relation to farmers' issues, Congress and Trinamool demonstrated in front of Gandhi statue separately yesterday for the same.