Since the pandemic began, three sessions of Parliament were curtailed (File)

Trinamool Congress Rajya Sabha member Dr Santanu Sen was today suspended from the House for the remaining part of the monsoon session for snatching IT Minister Ashwini Vaishnaw's statement on the Pegasus affair and flinging them amid the uproar in Parliament yesterday.

Rajya Sabha Chairman Venkaiah Naidu declared his suspension within moments of V Muraleedharan, the Minister of State for Parliamentary Affairs, moving a motion on this.

Earlier today, Several Opposition MPs, including Congress' Rahul Gandhi protested against the government inside Parliament complex over the Pegasus snooping issue and demanded a Supreme Court-monitored judicial probe into the matter.

Both the Houses of Parliament were adjourned till Monday amid uproar by Opposition leaders over host of issues, including the newly implemented farm reform laws and Pegasus row.

As you (TMC MP Santanu Sen) know that a resolution has been passed to suspend you from attending the proceedings till the end of the Monsoon session, we request you to leave the House: Deputy Chairperson of Rajya Sabha Harivansh

"Deeply distressed by the course of events in House. Proceedings of the House hit a new low with papers being snatched and torn into pieces. Such actions are clear assault on our Parliamentary democracy": Rajya Sabha Chairman M Venkaiah Naidu (ANI) #MonsoonSessionpic.twitter.com/twAAIDACAg

#WATCH | IT Min Ashwini Vaishnaw says, "TMC has culture of violence in Bengal. They're trying to bring the same to Parliament. What message do they want to give to the next generation of Parliamentarians?"

TMC's Santanu Sen snatched a paper from his hands & tore it in RS y'day. pic.twitter.com/LezONBUJfh

Opposition parties protested for an hour in front of Mahatma Gandhi's statue in Parliament. Our demands: a discussion in the House of the #pegasus affair & a judicial inquiry into the issue. The Indian people have the right to know what actually happened. pic.twitter.com/Anr907kgMj

Pegasus is classified by the Israeli state as a weapon and that weapon is supposed to be used against terrorists. The Prime Minister and Home Minister have used this against the Indian state and against our institutions: Congress leader Rahul Gandhi pic.twitter.com/lT9J470a82 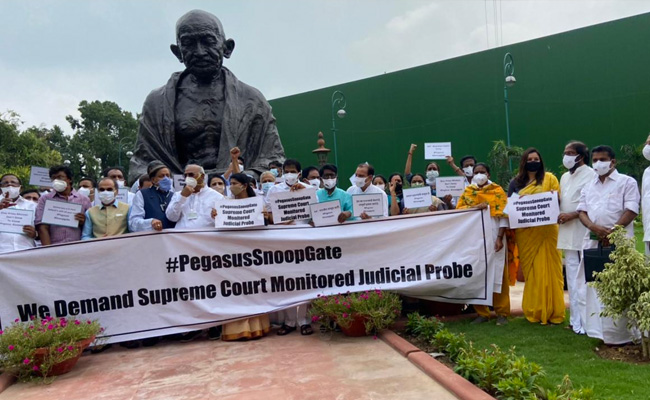 Congress MPs will also hold a protest in front of the Gandhi statue in Parliament on Friday over the farmers' agitation, ANI reported.
Jul 23, 2021 09:51 (IST)

All Congress MPs (both Lok Sabha and Rajya Sabha) to have a meeting at 9.45 am today at Congress Parliamentary Party (CPP) office. The party MPs will protest in front of Mahatma Gandhi statue in Parliament over farmers agitation and 'Pegasus Project' media report.

Jul 23, 2021 09:49 (IST)
Parliament LIVE Updates: Congress to protest in front of Gandhi statue in Parliament over farmers agitation, Pegasus issue
Congress MPs will hold protest in front of Mahatma Gandhi's statue in Parliament over farmers' agitation and the "Pegasus Project" media report today.
Prior to joining the protest, the Congress MPs will attend a meeting at Parliamentary Party (CPP) office, ANI reported.