"PM Modi, Amit Shah Are My Leaders": Pankaja Munde Amid Protests By Supporters 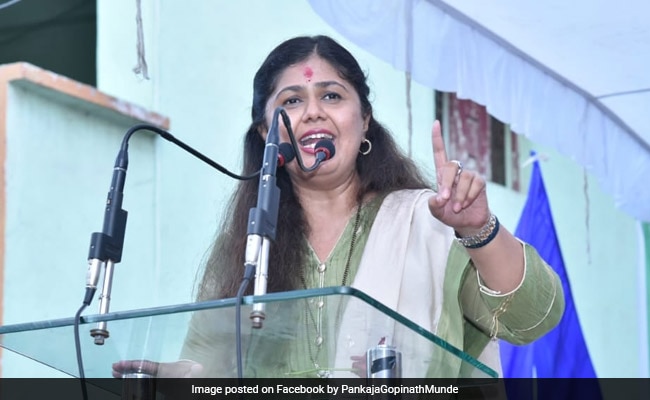 BJP leader Pankaja Munde said she would always protect her fortress and keep it strong. (File)

Amid reports that she was sulking over her MP sister Pritam Munde not finding a place in the newly-reshuffled Union cabinet and many BJP office-bearers from Beed in Maharashtra resigning in protest, party national secretary Pankaja Munde on Tuesday denied she was using any "pressure tactics" and said she will always try to avoid a "dharmayuddha".

Addressing BJP workers who came to Mumbai from Munde's home turf Beed and other parts of the state, Pankaja Munde hailed Prime Minister Narendra Modi, Union home minister Amit Shah and BJP president J P Nadda as her leaders. Invoking the epic Mahabharata, she said the righteous demands made by the Pandavas were rejected by the Kauravas.

The word "Ram" is loosely used in public communication denoting whether it is worth doing some work.

"(In Mahabharat), the Pandavas always tried hard to avoid the ''dharmayuddha'' with the Kauravs. The good person, always tries to avoid such war and I will do the same as long as it is possible,” Ms Munde said without naming anyone.

In a veiled swipe, she also said that some companions of the ''Kauravas'' wanted to be with the Pandavas from their heart.

Ms Munde had served as Rural Development Minister during the BJP-led government from 2014 to 2019. She lost the 2019 Assembly polls from Parli seat to her estranged cousin and NCP leader Dhananjay Munde.

"The Pandavas had placed a very small demand before the Kauravas demanding (administrative rights of) five villages but it was rejected which resulted in a "dharmayuddha"," she said.

"...If the roof comes down, (I) will decide what to do next," she said cryptically.

Asserting that she cannot be written off, Ms Munde said, “I had lost an election but I am not finished. If I had finished already, there would not have been efforts to finish me. I am standing here before you because of my supporters."

Speaking about her Delhi visit, Ms Munde said, "I had gone to Delhi to attend a meeting of the national secretaries of the party. It triggered some speculation in Maharashtra that I was scolded by national leaders. Look at my face now, and tell me whether I look like a person who got scolded".

She said Mr Nadda had asked her to convince my supporters. "Incidentally, the news of I was scolded by PM Modi followed," she said.

Ms Munde claimed she had refused to accept a Union ministry offered to her after the death of her father Gopinath Munde in a car accident in 2014. "Why would I demand a ministerial berth now,” she questioned.

Ms Munde also stressed that she was not greedy for any post. “I did not join the politics for any post. My politics do not revolve around the ending careers of others. If I have to mount pressure on someone, this is not the place. I need a bigger place for that kind of work,” she added.

After her address, when reporters asked her why she did not mention the name of former chief minister Devendra Fadnavis as her leader, Ms Munde said, “I work at the national level and hence my leaders are (Mr) Modi, (Mr) Shah and (Mr) Nadda.”

She did not take names of either Mr Fadnavis, current Leader of Opposition in the Maharashtra Assembly, or state BJP president Chandrakant Patil.

However, she said that there was a "strong perception" among the party workers that she was constantly getting sidelined.

"I have asked the party workers not to submit their resignations. I do not need them to resign from their local posts to mount pressure on senior BJP leaders. I have had proper communication with my leaders in New Delhi,” she told reporters.

Ms Munde said many people are feeling strongly that she was being sidelined purposefully.

"My name was slated for the post of an MLC but Ramesh Karad was chosen that time and I was made to withdraw my form. A similar thing happened with Bhagwat Karad (MoS in Union cabinet from Aurangabad) also. When my name was discussed. I had even attended his nomination to Rajya Sabha. Instead of me, he was given the ticket to Rajya Sabha," she said.

Ms Munde said she was intimated about Karad, groomed by late Gopinath Munde, getting inducted into the Union cabinet at the last moment.

"Because of these incidents, supporters of late Munde feel that we are being denied an opportunity at every front," the former minister said.