Baramulla: A second Pakistani terrorist was caught in Jammu and Kashmir today, less than a month after the capture of Mohammad Naveed, who has given Indian investigators vital information.

The terrorist has been identified as 22-year-old Javed Ahmed from Muzaffargarh in southwestern area of Punjab in Pakistan. He is also known as Sajjad and Abu Ubedullah. Four of his companions were killed in a 20-hour-long gun battle in Baramulla, North Kashmir.

Security forces fired tear gas shells and 'chilli grenades' into the cave Javed was hiding in to flush him out.

"The arrest of yet another Pakistani terrorist strengthens our position. There remains little doubt about Pakistani involvement in propping up terror," said Union Minister of State for Home, Kiren Rijiju.

Javed's group of five terrorists allegedly entered India with his four companions through Uri sector. The group was intercepted at Murgan Behak near the Line of Control (LoC), but they managed to escape. They were spotted again last evening, hiding in a cave in the Panzla forest area in Rafiabad, around 85 km from Srinagar. 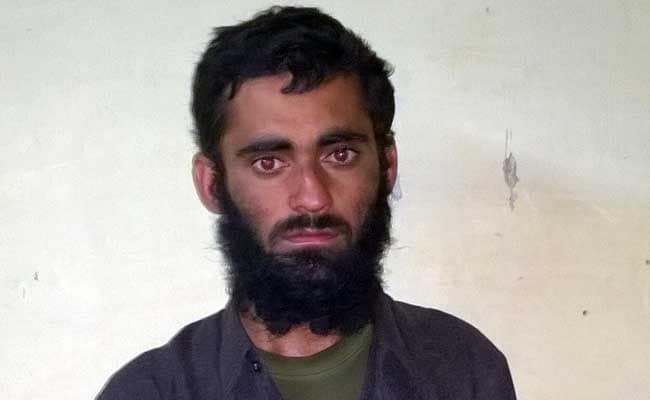 Javed was caught after a 20-hour gunbattle

One terrorist was killed yesterday and three more were shot dead today.

Javed has been taken to an interrogation centre in Srinagar where he is being questioned.

Earlier this month, Naveed was caught by villagers after he attacked a paramilitary convoy in Udhampur.

Naveed, who was in the Kashmir Valley for nearly two months before the attack, has revealed crucial details to investigators, including that he was trained in camps run by the terror group Lashkar-e-Taiba in Pakistan.

India had planned to raise recent terror attacks - in Udhampur and Punjab's Gurdaspur - and the revelations of Naveed in a meeting with Pakistan's National Security Advisers scheduled for Monday; the meeting was canceled at the eleventh hour amid sharp disagreements. Islamabad has disowned Naveed, who had said just after his capture that he belonged to Faisalabad in Pakistan.