Over Fight For a Bungalow, Delhi's VIP Zone Blocked To Traffic 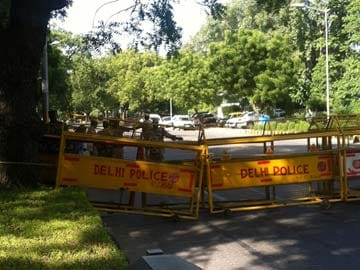 New Delhi: Key roads near Prime Minister Narendra Modi's residence in Delhi's most protected area have been shut today over protests by supporters of Uttar Pradesh politician Ajit Singh, who is fighting to keep a government bungalow.

Mr Singh, the chief of the Rashtriya Lok Dal and former Civil Aviation Minister, was recently forced to vacate the 12, Tughlaq Road bungalow that he has stayed in for years but is no longer eligible for, after losing the national election in May.

He has demanded that the property be turned into a memorial for his father, former prime minister Chaudhary Charan Singh. Activists of his party and a farmers' organisation, the Bhartiya Kisan Union, have planned a "Mahapanchayat" or meeting at the house, but the police say it is illegal.

Some protesters who tried to break the cordon were chased down and bundled into police vehicles. Around 20 activists in all-white dhoti-kurta and turbans squatted by the roadside and shouted slogans.

"We have detained a few people already. All roads will be cordoned off till it is necessary," said senior Delhi Police officer MK Meena.

The police have taken extra precautions to prevent protests or clashes in the high-security area that is home to top ministers, officials and diplomats.

For hours, commuters have been diverted and forced to take circuitous routes to schools and offices. Their only warning was a Delhi Police tweet. Tughlaq Road has been completely barricaded and riot police have been positioned.

The Delhi Metro station near Tughlaq Road, which connects north Delhi and Gurgaon, has been shut down.

Promoted
Listen to the latest songs, only on JioSaavn.com
Last week, Mr Singh's supporters fought hard to stop his eviction. They blocked the national highway, causing massive traffic jams, and even tried to cut off water supply to Delhi by damaging a regulator near the city that controls distribution.

The row is being linked to the pride of Ajit Singh's Jat community ahead of the October 15 polls in Haryana, where Jats are a fifth of the population. Chief Minister Bhupinder Singh Hooda has written to the Centre, backing the demand for a memorial.
Comments
Tughlaq Roadtraffic jamsNew Delhi