The main ceremony will be held on November 30 at Gurdwara Janamasthan Nankana Sahib in Punjab province. 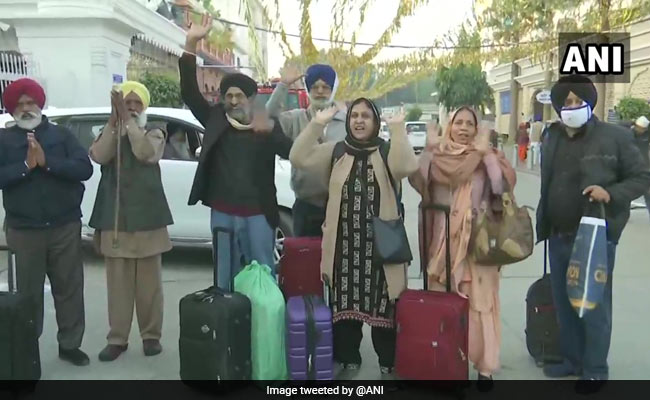 During their 10-day stay, the pilgrims will visit other gurdwaras in the province.

Over 600 Sikhs arrived in Lahore from India through the Wagah border on Friday to take part in the celebrations of the 551st birth anniversary of Guru Nanak Dev at Nankana Sahib, the birth place of the founder of the Sikh faith.

The main ceremony will be held on November 30 at Gurdwara Janamasthan Nankana Sahib in Punjab province.

During their 10-day stay, the pilgrims will visit other gurdwaras in the province. "On the instruction of ETPB chairman Dr Aamer Ahmed, foolproof security arrangements have been also made for the visiting yatrees," Hashmi said.

Two members of Indian High Commission, R B Sohran and Santosh Kumar, arrived here from Islamabad to greet the pilgrims at Wagah.

Hashmi said the representatives of Punjab health department checked all passengers for any signs of the coronavirus and their negative COVID-19 test reports which they brought with them.

After immigration and custom's formalities, the delegates left for Gurdwara Janamasthan Nankana Sahib by buses.

Every year, more than 2,000 Sikhs come to Pakistan to take part in the birth anniversary celebrations of Guru Nanak Dev. The number is reduced this year due to the ongoing pandemic.