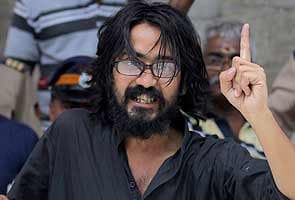 Mumbai: There is widespread outrage at the weekend arrest of Kanpur-based cartoonist, Aseem Trivedi, on charges of sedition, with his supporters alleging that it is politically motivated and that he is being punished for backing Anna Hazare's anti-corruption campaign. (Comment here)

The Mumbai police arrested Mr Trivedi, a member of the India Against Corruption or IAC, on Saturday based on a private complaint filed by a lawyer in December last year that he had put up banners mocking the Indian Constitution during an Anna Hazare rally in Mumbai. He has also been charged with posting seditious and obscene content on his website, which has been blocked. Cartoons like one where the activist has altered the three-lion national emblem in a satirical depiction to highlight corruption have attracted the sedition charge. Mr Trivedi has been remanded in police custody till September 16. However, according to sources, the Mumbai Police is likely to request the court today to send Mr Trivedi to judicial custody. The cartoonist may apply for bail if he is sent to judicial custody.

The Chairman of the Press Council of India, Markandey Katju, slammed the Mumbai police for the arrest, comparing them to Nazi War criminals. "The policemen who make such illegal arrests cannot take the plea that they were obeying orders of political superiors. In the Nuremberg trials, the Nazi War Criminals took the plea that orders are orders, and that they were only obeying the orders of their political superior Hitler. But this plea was rejected by the International Tribunal which held that illegal orders should be disobeyed," Mr Katju said yesterday.

"One shouldn't disrespect the national emblem. Aseem is relatively an unknown figure and therefore he is arrested, while celebrities go scot-free," said Yogachirya Anand, an activist.

Mr Trivedi's supporters today staged protests outside union minister Sriprakash Jaiswal's house in Kanpur. The protesters shouted slogans and demanded that Mr Jaiswal, who is the local MP and the union coal minister, intervenes in the matter. Mr Jaiswal has reportedly assured the protesters that he would look into the issue.

"A lot of my workers from Kanpur and Unnao met me and made this demand that there is some Aseem Trivedi who has been arrested by the Maharashtra Police. Now I will try and find out on what charges he has been arrested, what exactly has happened, and only then I would be able to comment," Mr Jaiswal said today.

Mr Trivedi's arrest has sparked outrage in the virtual world as well. "You may not like Aseem Trivedi's cartoons or the cause he espoused but how can you accuse him of sedition?" tweeted Sonali Ranade.

"What was so different with Aseem Trivedi? He said thru cartoons what many others say about governance or lack of it in columns every day," tweeted S Irfan Habib.

The Mumbai police has said the arrest is a procedural formality and that it has acted on a complaint. "He has shown disrespect to the National emblem and therefore he has been arrested under section 124 A," said Chandrakant Bhosale a senior inspector of the Mumbai Police said. The First Information Report states that the accused had put "ugly and obscene content" on his website.

India Against Corruption members today staged a protest outside the Bandra Police Station, where Mr Trivedi has been kept in remand. They say they are not being allowed to meet the cartoonist and the cops have refused to show them the papers of Mr Trivedi's arrest.

Yesterday, Mr Trivedi remained defiant during his arrest. "If telling the truth makes one a traitor, then I am happy. Likewise even Gandhi, Bhagat Singh are traitors. If while doing service to the nation I am booked under sedition, I will continue to do so and get arrested," he said. AK Khan, a friend of the cartoonist, has alleged that Mr Trivedi has been repeatedly manhandled since his arrest. The IAC, which has been attacking the government over a series of alleged scams, has pledged support for him alleging that the arrest is politically-motivated.

One of the members of the IAC, Preeti Menon, said, "Whoever raises their voice against corruption is termed as a seditionist, anti-nationalist and a Naxalite."

A Mumbai court had issued a non-bailable warrant against the cartoonist last month on lawyer and Republican Party of India member Amit Katarnavea's complaint that Mr Trivedi mocked the Indian Constitution during Anna Hazare's anti-graft rally held last year at the Bandra Kurla Complex. A police team was sent to his residence in Kanpur but he wasn't traceable; so his parents were informed and the warrant was served. Mr Trivedi surrendered on Saturday.

Promoted
Listen to the latest songs, only on JioSaavn.com
The cartoonist's father Ashok Trivedi says the family had no prior information. "Whenever he drew cartoons, it was in the welfare of the country and when he organised this exhibition of his cartoons on December 25, 26 during Anna's movement at MMRDA grounds last year, then some member of the Maharashtra Congress Committee filed a writ in the High Court and based on that Police issued a warrant without any prior information," he alleged.