The shocking episode took place a day before the start of the monsoon session of the state assembly where, among others, a bill against cow vigilantism is to be introduced

The 24 men hail from Khandwa, Sehore, Dewas and Harda districts, and include six Muslims

A group of 24 men who claimed to be transporting cattle to an animal fair in Maharashtra were thrashed and forced to chant "gau mata ki jai" by a gang of cow vigilantes yesterday in Khandwa district of Madhya Pradesh. In a disturbing video of the incident, filmed with a mobile phone, 15 of those men can be seen tied together with rope and forced to kneel by the side of the road, in full view of the public, while being made to chant "gau mata ki jai".

The video also shows a man in a white shirt using what appears to be a mobile phone to take a close-up video or photograph of each man's face, while at least two others stand guard over the tied-up men.

The men were waylaid by a band of vigilantes, who numbered 100 according to a report by news agency PTI, from Savalikeda village. The vigilantes alleged the men were transporting 20-odd cattle for slaughter. They were overpowered, tied up and paraded through the streets on their way to Khalwa police station, which is approximately three kilometres from the village.

According to district police superintendent Shivdayal Singh, the men claimed to own the cattle being transported but could not prove that claim.

"With none of the 24 men possessing valid documents to prove their claims and also transporting the cattle in vehicles in consonance with relevant guidelines, they were arrested and booked under provisions of the Madhya Pradesh Govansh Vadh Pratishedh Adhiniyam and provisions of Prevention of Cruelty to Animals Act," he said.

No action has yet been taken against the vigilantes; police say they are probing allegations of cruelty.

The 24 men hail from Khandwa, Sehore, Dewas and Harda districts, and include six Muslims.
The shocking episode took place a day before the start of the monsoon session of the state assembly where, among others, a bill against cow vigilantism is to be introduced. If passed, the bill will allow those convicted under it to be jailed for between six months and five years, as well as be fined up to Rs 50,000.

The existing cow protection regulation has no provision of a jail term or fine. 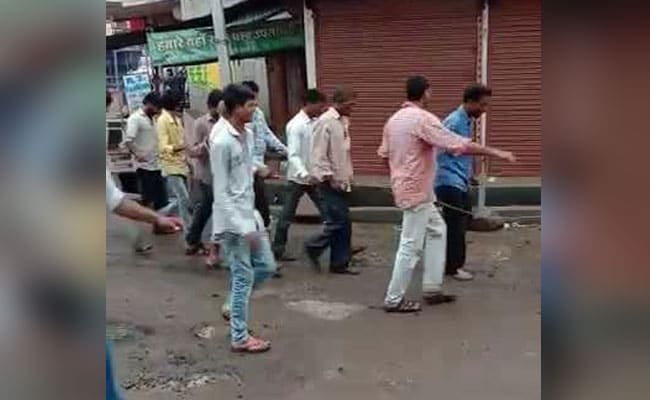 According to district police superintendent Shivdayal Singh, the men claimed to own the cattle

In May two men were tied to a tree and thrashed for allegedly carrying beef in an autorickshaw at a village in Madhya Pradesh.

In a video of the incident, shot by an eyewitness on a mobile phone, a woman was also seen being hit repeatedly with a slipper on her head, covered with a piece of cloth, as she curled up on the gravel and took the blows in silence from the attacker who was heard yelling at her, "Jai Shri Ram".