On Video, Woman Among 3 Thrashed Over Beef Rumour In Madhya Pradesh

Two men were tied to a tree one by one and thrashed by a group for allegedly carrying beef in an autorickshaw at a village in Madhya Pradesh. In a video of the incident shot by an eyewitness on a mobile phone, a woman was also seen being hit repeatedly with a slipper on her head, covered with a piece of cloth, as she curled up on the gravel and took the blows in silence from the attacker who was heard yelling at her, "Jai Shri Ram".

The police said five men have been arrested from Seoni city, 350 km from state capital Bhopal.

"The video is four days old and four people have been arrested. They have been sent to jail by a local court. One more accused has been arrested. He will appear in court today," local police officer Lalit Shakyavar said.

One of the accused, Shubham Singh, who calls himself a member of "Ram Sena", posted the video on his Facebook account on May 23; he deleted it later. In a photo he uploaded in April, he is seen standing next to BJP parliamentarian and Malegaon blasts accused Pragya Thakur and a group of men.

On May 22, the two men and the woman were travelling in an autorickshaw when they were intercepted by the group of vigilantes, who accused them of carrying beef, the police said.

Instead of informing the police, the men took matters on their own hands and held the passengers hostage and interrogated them, witnesses said. 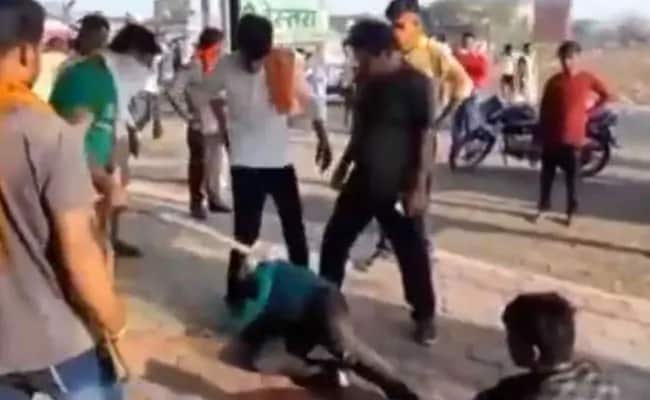 In the video, the group is heard chanting "Jai Shri Ram" as they landed blows after blows on the men who were tied to a tree. One of them is untied and pushed to the ground as more sticks landed on his body, the video shows.

People who gathered about where the beatings happened said no one called the police when the incident was unfolding.

The three who were thrashed on May 22 have been identified as local residents Dilip Malviya, Taufik and Anjum Shama. They were sent to judicial custody on May 22 after a complaint over allegedly carrying beef was filed against them by the vigilantes.

The next day, after Shubham Singh uploaded a video of the attack on Facebook, Dilip Malviya's sister saw it and then filed an FIR (First Information Report) against the beatings, following which the police arrested the five men, including Shubham Singh. The other four accused have been identified as local residents Yogesh Uikey, Deepesh Namdev, Rohit Yadav and Shyam Dehriya.

Senior police officer Gopal Khandel said samples of the meat have been sent for forensic analysis to a laboratory in Hyderabad. "We have no information if the accused are linked to any political group," he added.