On Day Of UP Mob Killing, Bulandshahr School Children Given Early Meal

Unaware of the tension simmering barely 100 metres away, it was rather unusual for the children in school who are generally given the meal at 12.30 pm. 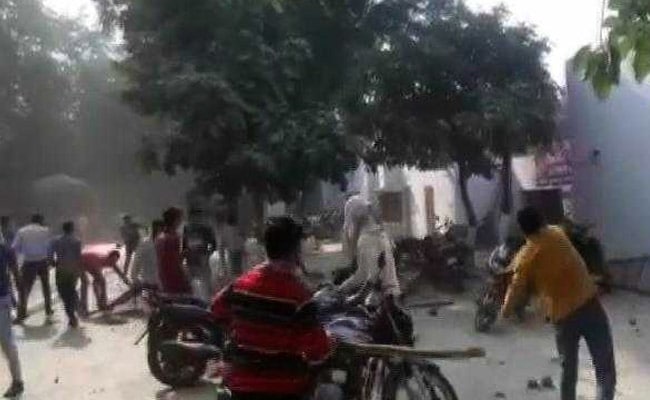 Two, including a cop, were killed in Bulandshahr on Monday in a mob violence allegedly over cow slaughter

On December 3, over 150 students at a primary and junior secondary school in Bulandshahr's Chingrawathi village in Uttar Pradesh, where a mob of some 400 people violently confronted police the same day, were served the mid-day meal early -- at 11.15 am.

Unaware of the tension simmering barely 100 metres away, it was rather unusual for the children in school who are generally given the meal at 12.30 pm.

"That day, we had got an order to distribute the meal early and send the children home," Rajpal Singh, who cooks and serves the mid-day meal, told news agency PTI.

The school, which has 107 children in primary classes and 66 in junior secondary, opens at 9 am and continues till 3 pm.

"After the children were fed the meal, they were quickly sent home," Deshraj Singh, the teacher in-charge of the primary school, said.

"Some children left their meal midway and some had left their school bags behind, which were later torn by monkeys," he added.

Deshraj Singh, along with two teachers and two shiksha mitras, teaches the students from Class 1 to Class 5.

Uma Rani, along with one more teacher, teaches the students from Class 6 to Class 8. Both primary and junior secondary sections operate from the same school campus.

"The crowd was unusually loud, it appeared unprecedented. A message reached us from the Basic Shiksha Adhikari at 11 am, saying the situation does not look fine due to the Ijtiba (Muslim congregation). Serve meal to the children and leave them early," Deshraj Singh said.

A huge crowd had gathered in Bulandshahr for the three-day Ijtiba, being held at a distance from site of violence. But the main road, near the school, was packed with vehicles and people heading to the congregation.

"Huge number of people, truck loads of people were going to the Ijtiba," said a man, in his 50s, who runs a kiosk of grocery items near the main road.

The school kids were his primary customers. Deshraj Singh said the teachers, who come from Meerut, were also asked to leave early lest they get caught in the traffic.

He said on Monday, everyone left early from the school and later the district administration ordered closure of all schools on Tuesday.

When the school reopened on Wednesday, there were no students even as teachers Deshraj Singh and Uma Rani waited for them with other staff.

"Certainly it is due to the tension that has gripped the village since Monday," Uma Rani said, expressing hope that the situation would improve and children would return to school.

A 20-year-old man and a police official were killed in Bulandshahr on Monday in a mob violence apparently after cow carcasses were found in a nearby jungle.