Number Of Deaths Due To Bihar Floods To Rises To 228 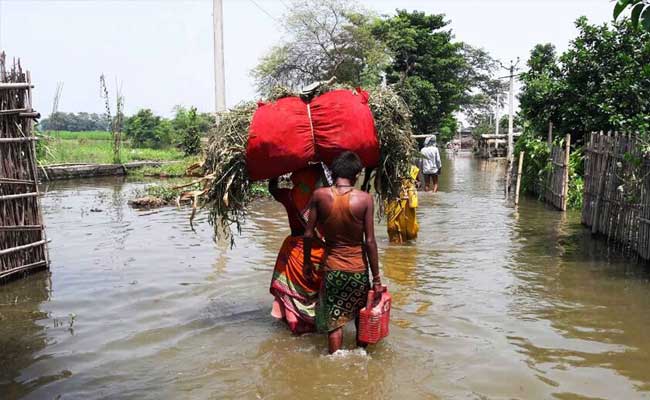 The government has deployed 2,537 boats for evacuationof people stuck due to floods in Bihar.

Patna: With six more deaths, the toll in Bihar floods today increased to 228 even as the flood situation eased with all major rivers except Punpun, Kosi and Kamlabalan, flowing below danger mark.

Three persons each died in districts of Saran and Begusarai, a Disaster Management Department statement said. 31.30 lakh people have been affected in 1,725 villages of 12 districts, the release said.

As per the department's release, a total of 3.94 lakh people have been evacuated from the 12 flood-affected districts of Buxar, Bhojpur, Patna, Vaishali, Saran, Begusarai, Samastipur, Lakhisarai, Khagaria, Munger, Bhagalpur and Katihar.

The government has deployed 2,537 boats for evacuation, while national and state disaster response forces were already working in the affected districts, it said.

The number of camps has gone down from yesterday's 318.A total of 220 camps are being operated for cattle affected by flooding.

According to the state water resources department, Punpun river at Sripalpur in Patna, Kosi river at Baltara in Khagaria district and Kamlabalan in Jhanjharpur district were flowing above danger level.

Promoted
Listen to the latest songs, only on JioSaavn.com
The Ganga continued to recede at Digha ghat, Gandhi ghat and Hathidah in Patna district and Buxar, Munger, Kahalgaon and Bhagalpur in Bhagalpur district, the release added.

Something Being Covered Up: Nawab Malik On Politicians Ban In West Bengal