The government on Monday revoked Article 370 that gave special status to Jammu and Kashmir and proposed that the state be bifurcated into two union territories, Jammu and Kashmir, and Ladakh. 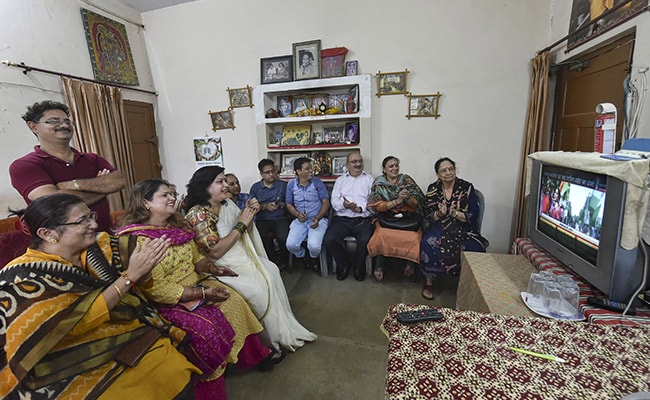 Kashmiri Pandits displaced from the Valley in the 1990s on Monday hailed the scrapping of Article 370, hoping it would bring peace to the region and pave the way for return to their homeland with honour and dignity.

The government on Monday revoked Article 370 that gave special status to Jammu and Kashmir and proposed that the state be bifurcated into two union territories, Jammu and Kashmir, and Ladakh.

Global Kashmiri Pandit Diaspora (GKPD), a body representing the community across the world, said the decision cements territorial, political and cultural unity of the Indian Union.

"August 5, 2019 will go down in the history of the country as a day that has put the lasting seal on the sovereignty of Parliament over the entire Indian Union," it said in a statement.

"The draft bill presented by Home Minister Amit Shah in Parliament vindicates the ideals of our great leaders like Syama Prasad Mukherjee, Deendayal Upadhyaya, Atal Bihari Vajpayee and others who dedicated or sacrificed their lives for the integrity and sovereignty of India," the GKPD said.

This is for the first time that the exiled community has heaved a sigh of relief that its identity, culture and symbols of heritage will find full protection and perpetuation under the union territory dispensation, it said.

The Kashmiri Pandit community hopes that the Modi government will chalk out a road map of their return to the Valley soon, he said.

"We want a separate settlement in the Valley where all Kashmiri Pandits, who borne the brunt of forced exodus, can live together," Bhan said.

Amit Raina from ''Roots in Kashmir'' said the decision has put to rest the suspicion over complete integration of Kashmir into Indian Union.

The root cause of the Kashmir issue is that there is no free flow of Indian Constitution in the state. With the Union Territory status, that will also happen. It will also spur the development of Ladakh, he said.

Raina said the government should also make efforts to give a sense of closure to those who lost their family members in violence in Kashmir "during the exodus in the 1990s".

"If conviction can happen in a span of four years in Gujarat, why not the same can happen in Kashmir. Justice is paramount. The process should restart immediately," he said.

Sumeer Changroo from Kashmir Samiti Delhi claimed around 7.5 lakh Kashmiri Pandits were forced to flee the Valley in the 1990s.

"Loudspeakers blared warnings, asking Kashmiri Pandits to fled the Valley, leaving their women behind. It's impossible to forget the horror, the macabre nights... Now, we will able to return to our homeland," he said.

The process of resolving the Kashmir issue has begun with the abrogation of Article 370. Till now, political parties had been using the provision for their narrow political gains, he said.