Not chief minister anymore, but will try and do what I can: Arvind Kejriwal to supporters a day after he resigned 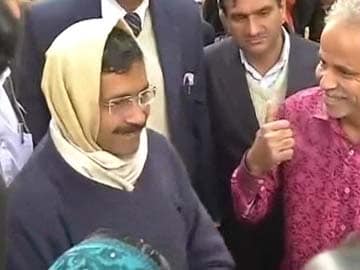 New Delhi: The morning after Arvind Kejriwal resigned as Delhi Chief Minister, some of his supporters gathered outside his residence to meet him. As he came out to greet them, the Aam Aadmi Party chief smiled and said, "I am not the Chief Minister anymore, but I will try and do what I can."

The 45-year-old resigned on Friday evening, less than two months after he took oath as Delhi's Chief Minister. He quit after his push for the anti-corruption Jan Lokpal Bill was blocked in the state legislature by law-makers from the Congress and the BJP. (Back to Aam Aadmi. Arvind Kejriwal quits as Chief Minister)

Mr Kejriwal has said the Jan Lokpal bill is the heart of his party's agenda and is essential to cleanse the polity of deep-rooted graft. The legislators from the Congress and BJP who voted to prevent him from tabling the Jan Lokpal Bill yesterday say they support the proposal, but cannot ignore the fact that it has been vetoed by Delhi's constitutional head, Lieutenant Governor Najeeb Jung. Mr Kejriwal had firmly rejected the opinion that before it is presented for review in the legislature, the bill must be vetted by the Lieutenant Governor as a representative of the Centre. (Kejriwal was looking for excuse to run: Congress)

After much chaos at Delhi assembly, Mr Kejriwal headed to his party's office where he addressed supporters and announced his resignation. "They know that if this law is brought in, their leaders will end up in jail," he said. Earlier, in the Delhi Assembly, he had declared, "I will give up the chief minister's office not once but 1000 times to fight against corruption."
('They think they are angrez': Kejriwal's top 10 quotes)

Promoted
Listen to the latest songs, only on JioSaavn.com
From his party office, he went to meet the Lieutenant Governor to hand over the resignation of his cabinet and recommended that the assembly be dissolved and fresh polls be held. (Arvind Kejriwal's resignation letter: full text)

Delhi being a Union Territory-state, Mr Jung is not bound to go by the advice of the outgoing chief minister and his council. He will need to apprise President Pranab Mukherjee about the development. Meanwhile, the AAP will continue to be a caretaker government which cannot take any policy decisions. (In short term as chief minister, Arvind Kejriwal trafficked in change)
Comments
Arvind Kejriwal