The protesters, including six named persons, have been booked for violating CrPC Section 144 imposed in Gautam Buddh Nagar district, according to the First information Report (FIR) lodged on complaint of the local police station in-charge. 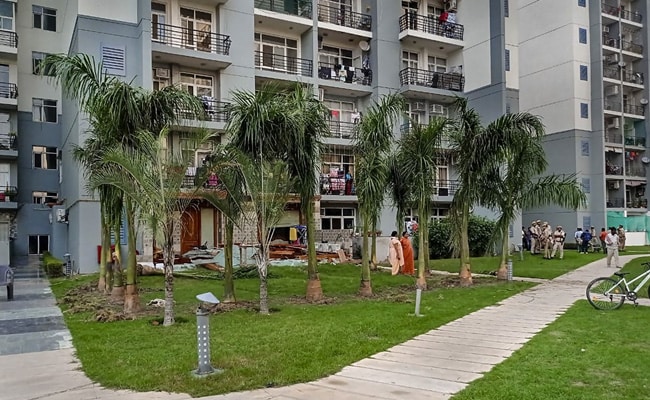 A row had erupted at Grand Omaxe over plantation of more than a dozen palm trees.

The Noida police have booked around 75 people, mostly members of the Tyagi community, who had protested in support of jailed politician Shrikant Tyagi outside his society here, officials said on Thursday.

The protesters, including six named persons, have been booked for violating the Code of Criminal Procedure(CrPC) Section 144 imposed in Gautam Buddh Nagar district, according to the First information Report (FIR) lodged on complaint of the local police station in-charge. Among those named in the FIR are farmer leader Mangay Ram Tyagi, who had led the protest, Gyaneshvar Pradhan, Sushant Tyagi, Aadesh Tyagi, Ravindra Rajput and Sobha Tyagi, the officials said. "A protest was held outside the Grand Omaxe society on Tuesday and Wednesday by Mangay Ram Tyagi and his supporters. The protest was not in accordance with the law neither any permission was sought for it. In this context, an FIR has been lodged at Phase 2 police station and the matter is being further investigated," Additional Deputy Commissioner of Police (Central Noida) Saad Miyan Khan said.

According to the FIR, amid CrPC 144 restrictions, the protesters had disrupted people's movement on the road and also "instilled fear and terror" among the society residents with their act.

They have also been booked under Indian Penal Code sections 188 (disobedience to order duly promoted by government officials), 147 (rioting), 341 (wrongful restraint) and under provisions of the Criminal Law Amendment Act, the FIR showed. On Tuesday evening, scores of Tyagi community members from Noida, Ghaziabad, Meerut, Hapur and other places had gathered on the service lane outside the Grand Omaxe society in Sector 93B and stayed there till Wednesday evening before calling off the protest.

"We are here in support of our community members. Our only demand is that same law should be applied to everyone. There are many residents who have encroached common area of the society but only Shrikant Tyagi's property was bulldozed and his plants removed," Dharmendra Tyagi, who came from Ghaziabad, had told PTI on Wednesday.

A row had erupted at Grand Omaxe over plantation of more than a dozen palm trees on alleged common area of the society by the Tyagi family.

A major controversy had erupted on August 5 at the society when Shrikant Tyagi was confronted by a woman resident over his alleged encroachment of the common ground area of the apartments. The Noida Authority had bulldozed a portion of Shrikant Tyagi's house and removed trees planted by his family allegedly on common areas of the society.

Shrikant Tyagi, who flexed political connections and claimed association with the ruling BJP, was caught on camera assaulting the woman resident of the society after he was challenged by her. He was also heard hurling expletives at the woman, who objected to his installing plants in the common area.

In the wake of the controversy, the BJP had denied links with Shrikant Tyagi, who had remained missing for four days before being arrested and booked under the Gangsters Act, among other charges. He is currently in jail and the matter for his bail is in the Allahabad High Court.