No Probe Against the Film 'PK' in Maharashtra: Chief Minister Devendra Fadnavis 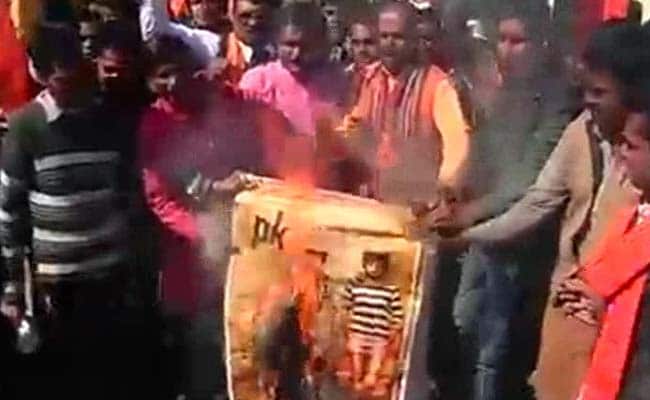 Protests against PK outside a theatre in Bhopal

New Delhi: Maharashtra Chief Minister Devendra Fadnavis today denied asking the police to study Aamir Khan's film PK to determine if it offends religious sentiments. Reports that he had asked for such an inquiry had provoked sharp criticism.

"Censor board cleared film, no question of not letting it screen... Need to ensure screening continues without incident... Have to ensure law and order is maintained," Mr Fadnavis said.

PK, directed by Raj Kumar Hirani, has crossed 250 crores in ticket sales since it was released across the country on December 19. However, members of right-wing hardliner groups have attacked some cinemas screening the movie, describing it as offensive to Hinduism. PK takes on self-styled godmen who mislead the public in the name of religion.

The protests against PK have been condemned as an attack on the freedom of expression and speech.

In a statement, Mr Hirani said, "I appeal to the groups protesting against our film to see the film in totality and not just isolated scenes. Our intention is not to hurt anyone, or to discriminate against any religion."

In August, the Supreme Court turned down a Public Interest Litigation asking for a ban on the film. The judges stated that anyone who is against the movie should not watch it.

Censor Board chief Leela Samson said recently that there was no question of the movie being reviewed again to determine if contentious scenes should be removed. "We are not a censorship board. Political or ideological groups may advice their followers not to watch it," she said.

This is the Entire Statement by Director Raj Kumar Hirani

I'm deeply saddened and concerned about the protests by some groups against our film PK.

On behalf of the entire team of PK I would like to clarify that we respect all religions and faiths.

Our film is inspired by the ideas of Saint Kabir and Mahtama Gandhi. It is a film, which brings to fore the thought that all humans who inhabit this planet are the same. There are no differences. In fact, I have the highest respect for the concept of "Advait"- the oneness of all humans - that is central to Indian culture, thought, and religion. It saddens me to think that a film that upholds this great Hindu principal is accused of being disrespectful of Hinduism.

I would like to thank the millions of deeply religious people have loved the film and expressed their feeling that the film in fact upholds the spirit of true religiosity and condemns only the abuse of it.

I appeal to the groups protesting against our film to see the film in totality and not just isolated scenes. Our intention is not to hurt anyone, or to discriminate against any religion. I would once again like to assure them that I have the highest regard towards all religions, and that we respect all religions and faiths.

I believe in the great Hindu idea - "Vasudhaiva Kutumbakam" - the whole world is a family.

Promoted
Listen to the latest songs, only on JioSaavn.com
Hinduism, Islam, Christianity, and indeed all religions, teach us brotherhood and love. The intent of the film is to uphold this great thought.


The movie has landed a big fan in Uttar Pradesh: Chief Minister Akhilesh Yadav declared that PK will run tax free in cinemas, which means tickets will be cheaper.