'No Indian Boots On Ground In Afghanistan,' India Tells US

Nirmala Sitharaman said India had contributed to Afghanistan for a very long time in development activities like building dams, schools, hospitals and roads.

Nirmala Sitharaman held talks with her US counterpart James Mattis in New Delhi.

New Delhi: India will continue its development and medical assistance in Afghanistan but will not send its troops, Defence Minister Nirmala Sitharaman asserted on Tuesday after a meeting with visiting US Defence Secretary James Mattis.

"There shall not be any Indian boots on the ground in Afghanistan," Nirmala Sitharaman said at a joint press conference with her US counterpart, ruling out troop contribution amid America's emphasis on greater participation by India in the war-torn nation.

"Our engagement in Afghanistan will continue, we shall expand our engagement," the minister said, replying to a question. 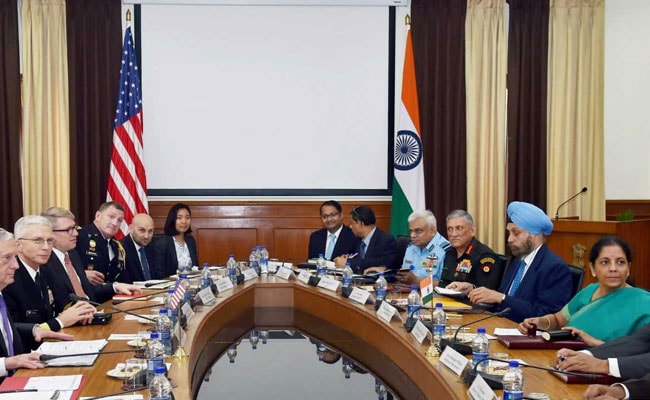 Ms Sitharaman said India had contributed to Afghanistan for a very long time in development activities like building dams, schools, hospitals and roads.

"We are also at the moment training their officials in good governance... India's contribution has been there and we shall expand if necessary," she said.

On Pakistan, the minister said both sides recognised the importance of holding those who use terrorism as an instrument of state policy to account for and dismantle the infrastructure that supports terrorism.

"The situation in our neighbourhood and the growing menace of cross-border terrorism were discussed in depth. There is growing convergence in the approaches of both our countries on this issue," Ms Sitharaman told reporters.

Without naming Pakistan, Mr Mattis said there can be "no tolerance to terrorism safe havens".

But Ms Sitharaman minced no words as she added: "The very same forces which did find safe haven in Pakistan were the forces that hit New York as well as Mumbai."

Promoted
Listen to the latest songs, only on JioSaavn.com
Last month, US President Donald Trump had said in a televised speech, "We appreciate India's important contributions to stability in Afghanistan, but India makes billions of dollars in trade with the US, and we want them to help us more with Afghanistan, especially in the area of economic assistance and development."

New Delhi has already extended $ 3 billion aid to Afghanistan and also provides training to its military and other assistance.