Lalu Yadav is serving jail sentences in several fodder scam cases and is currently lodged in a Ranchi hospital on account of poor health. 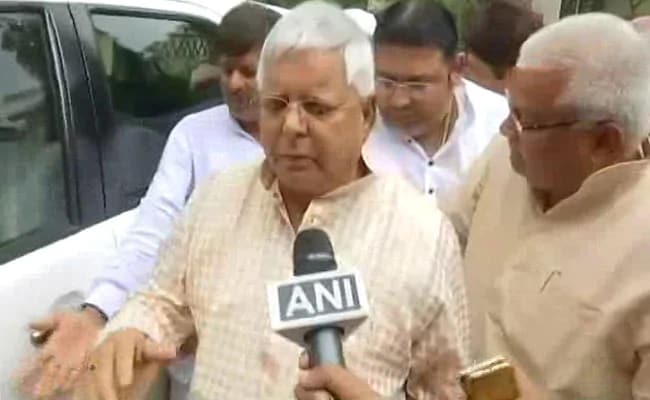 The JD(U) hit back at Lalu Yadav, saying his comment was "barbaric and violent".

He was apparently hinting at the virtual rallies and meetings being held by the Janata Dal (United) and attended by party leaders and workers.

"The health system has crumbled. The state government should have become a hawk in order to contain the spread of coronavirus. Instead, the JD(U) is engaged in organising vulture rallies making people the victims (of the disease)," Lalu Yadav tweeted in Hindi.

The former chief minister is serving jail sentences in several fodder scam cases and is currently lodged in a Ranchi hospital on account of poor health. His Twitter account is handled by his trusted aides.

The JD(U), however, hit back at Lalu Yadav, saying his comment was "barbaric and violent".

The RJD chief also claimed that Chief Minister Nitish Kumar has not come out of his residence even for four times in the past four months amid the pandemic outbreak.

A total of 15,771 people have recovered from the disease, while there are 9,018 active cases in the state, it said.

The entire world has been badly affected by COVID-19 and it has witnessed 10 lakh positive cases in past 100 hours, he said, adding there has been a steady rise in the number of positive cases in nine states, including Bihar, in the past seven to eight days.

"This is a challenge but the state's machinery is capable of dealing with the situation. Lalu Yadav's comment brings shame to humanity," the spokesman added.

"Democracy Can Deliver, Democracy Has Delivered": PM Modi At UN