Nitish Kumar Wants Trust Vote After 2 Weeks. This Is Why

New JDU-RJD-Congress government wants Bihar assembly session from August 24. The timing is not without meaning. 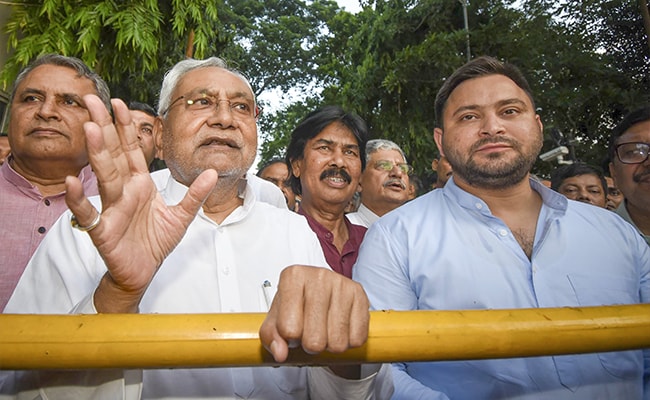 The first Bihar assembly session after Nitish Kumar took a fresh oath as chief minister is set to be from August 24 — and the timing is yet another canny move. It is in this session that the JDU-RJD+ government has to prove its majority, but the Speaker is still from the BJP, Nitish Kumar's former partner. The alliance wants to change that first, unwilling to risk anything even though it looks comfortable on paper.

Technically, the Governor calls the session, but he's to act as per the government's recommendation.

Fifty-five legislators from the new 'Mahagathbandhan' (Grand Alliance) have moved a no-confidence motion against Speaker Vijay Kumar Sinha. Rules say it can be taken up in the House only after two weeks of submission. August 24 means that rule won't be a problem.

The renewed Grand Alliance has support of 164 MLAs, several more than the 122 needed in the House of 243.

But the no-risk plan is straightforward: Before Nitish Kumar faces the trust vote on August 25, Mr Sinha be removed in the no-confidence vote, and a new Speaker be elected, on the first day of the session.

Mr Sinha may resign before that. Sources said he'll act on the BJP leadership's command. That will mean just an election to the post.

A new Speaker is to be from the RJD, as per the "chacha-bhatija" pact's terms and conditions.

Nitish Kumar and Speaker Sinha haven't had the best relationship even before this. In June, JDU had skipped a session in which its then-ally BJP sought to discuss who was the “best legislator”.

The RJD and Congress also boycotted the proceedings after Speaker Sinha didn't permit a debate on the Agnipath defence recruitment scheme. The JDU's opposition to the scheme was one of its many disagreements with the BJP. The Speaker said a discussion on that wasn't correct as the issue wasn't a state subject.