He said Bihar, which has two per cent of the world's population, is an important stakeholder in fulfilling the international commitment mentioned in the 2016 Paris Agreement. 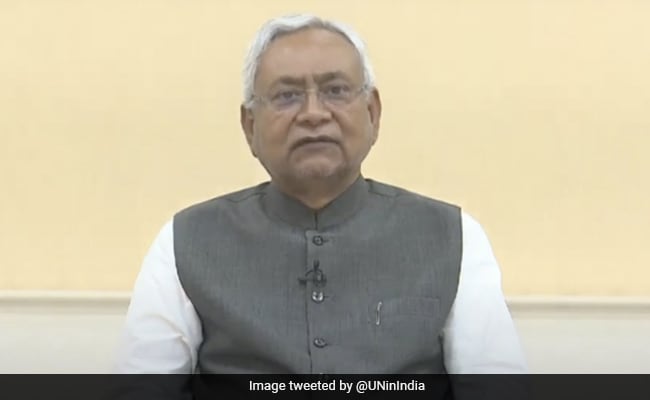 Nitish Kumar was the only leader from India to participate in the virtual high-level meet.

Mr Kumar was the only leader from India to participate in the virtual high-level Roundtable on Climate Ambition, hosted by UN chief Antonio Guterres, on the sidelines of the 75th session of the UN General Assembly on Thursday.

He said Bihar, which has two per cent of the world's population, is an important stakeholder in fulfilling the international commitment mentioned in the 2016 Paris Agreement.

"Considering the impacts of climate change in Bihar, in the form of erratic pattern of rainfall, extreme heat, falling groundwater level, drought and flash floods, we have developed our growth strategy around water conservation and greening initiatives under the 'Jal Jeevan Hariyaali Abhiyaan''," Mr Kumar said in his video address.

He stressed that it is his government's "firm belief" that any form of life is possible only when there is water and green cover.

India looks forward to working closely with the international community to design and achieve a carbon-neutral future: Chief Minister of Bihar 🇮🇳, @NitishKumar at the #UNGA High-Level Climate Change Round Table pic.twitter.com/9YBeyLQ0Hw

He highlighted that Bihar's approach to afforestation is community-driven to ensure green cover outside natural forest as well.

"Despite having one of the highest population density in the world, we are promoting food forestry to ensure food security along with enhanced green cover. We have allocated additional USD 3.5 billion from the state budget for this cause. Work is being executed in mission mode," he said.

"This would significantly contribute to the global efforts to achieve the 1.5 degrees Celsius target," he said.

Mr Kumar said Bihar looks forward to support from the international community to design and achieve a carbon neutral future.

Citing Mahatma Gandhi, who had said that the Earth has enough to satisfy everyone's need, but not everyone's greed, Mr Kumar stressed that the "global community should remember this while formulating any development strategy."

Speaking at the event, Guterres called for every government, business, civil and international organisation in the world to develop a transition plan to net-zero emissions, and boost ambition in finance and adoption as an equal priority to cutting emissions, and the only way to reach the 1.5C temperature goal.

"All actors - governments, cities and companies, NGOs and international organisations need to have their own transition plans to net-zero before 2050," said the Secretary-General.

To harness the growing momentum, the Roundtable also included the announcement of a virtual Climate Ambition Summit on the 5th Anniversary of the Paris Agreement on December 12.