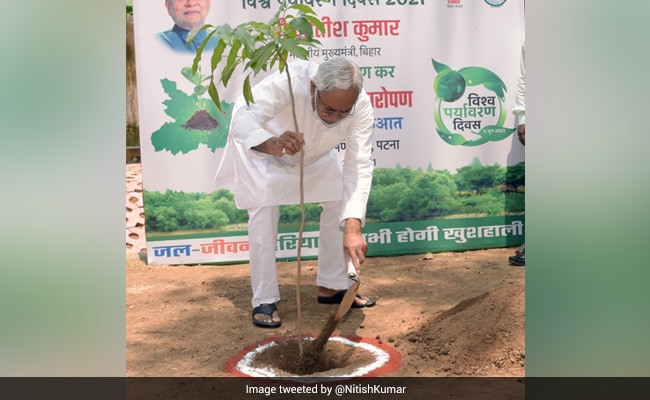 Bihar Chief Minister Nitish Kumar on Saturday launched an ambitious drive of planting five crore saplings in the state within a year. The drive was started on World Environment Day, with the Chief Minister planting a mahogany sapling on the grounds of his official residence, a statement said. Simultaneously, saplings were planted across villages, as non-profit bodies and paramilitary forces also joined the initiative, it said.

The state government proposes to complete Mission 5 crore, which shall be undertaken as part of Nitish Kumar's comprehensive anti-climate change - Jal Jeevan Hariyali - programme, in 2021-22. For this, 5.5 crore saplings are being grown by the forest department, who will be planting 1.24 crore of these, leaving two crore for the rural areas and another 1.50 crore for Jeevika volunteers. Another 50 lakh saplings will be distributed among farmers, who will be paid Rs 60 per sapling for three years.

More than 20 lakh saplings would be planted by non-profit groups, various boards and clubs and central paramilitary forces in the state. Another 15 lakh saplings will be made available to citizens through mobile vans.

According to an official release, Bihar lost much of its forests reserves after Jharkhand was carved out in 2000. Twelve years later, the Jal Jeevan Hariyali project was launched in the state to reverse the damage.The state now has 15 per cent green cover, which is a significant rise since the bifurcation.