More than 36 hours after the rain stopped in Patna, large parts of the city remained submerged with thousands of residents left without electricity or drinking water. 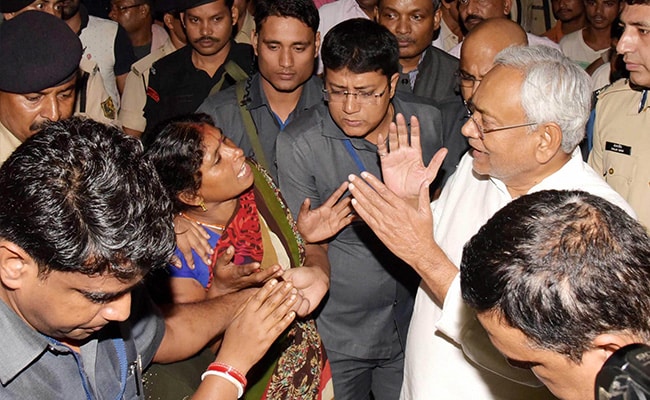 Bihar Chief Minister Nitish Kumar on Tuesday had to face a swarm of angry residents in Patna, battered by a flood, as he went on a survey of the worst-hit neighbourhoods. Seething at pointed questions on his visit, he lashed out, asking journalists if his state alone was reeling from floods.

"I am asking in how many parts of the country and across the world, have there been floods? Is water in some parts of Patna the only problem we have? What happened in America?" he said.

Calling the floods a natural calamity, Mr Kumar said heavy rain and droughts were realities. "Relief work is underway. Several arrangements are being made for pumping out the flood water," he said, after his survey.

More than 36 hours after the rain stopped in Patna, large parts of the city remained submerged with thousands of residents left without electricity or drinking water. Officials said disruptions in electricity supply and the unavailability of enough high-powered pumps were to blame for the crisis.

At least 42 people have died in Bihar because of rain-related incidents, authorities said.

Residents of marooned Patna localities like Hanuman Nagar, Rajendra Nagar and Kankar Bagh woke up to roars of Indian Air Force helicopters hovering in the sky with food and other relief material.

People, forced to stay indoors for more than 48 hours, dashed to the roofs of their buildings and pulled off their shirts waving at the choppers in a fervent effort to draw attention of IAF personnel towards their need for help.

"The situation wasn't so bad even during the 1975 floods," a resident told NDTV.

The National Disaster Response Force or NDRF, which has been conducting relief and rehabilitation since Sunday, stepped up their efforts on Tuesday.

"More than 200 of our personnel are involved in round the clock operations and we have rescued more than 3,000 people in the last three days, including 12 pregnant women and 323 others in need of medical attention," Commandant of NDRF 9th battalion Vijay Sinha told news agency PTI.

Lalu Yadav's RJD, the main opposition party in the state, issued a statement alleging "massive corruption in drainage projects" and demanded a white paper from the Nitish Kumar government.