The two scientists said their species was a little bit different from Georissa sarrita which was documented in 1851. 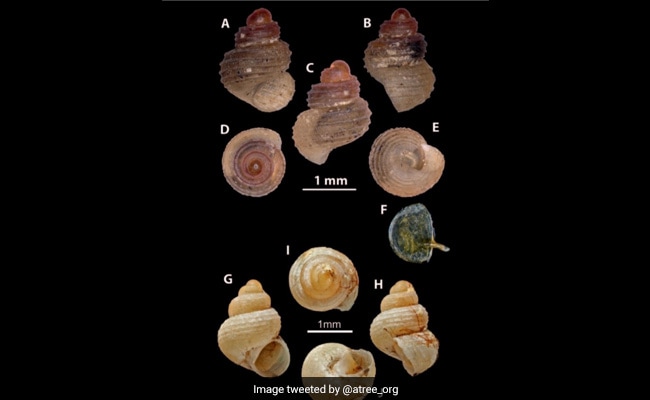 The new species of snails is different in shell size compared to the earlier one.

A new micro snail species was found from deep inside a limestone cave at Mawsmai village in Meghalaya's East Khasi Hills district, scientists who discovered it said on Thursday.

The snails having scientific name 'Georissa mawsmaiensis' are so small in size that an adult measures less than 2 millimetres in length.

The discovery was made by Nipu Kumar Das and NA Aravind, scientists of the Bengaluru-based Ashoka Trust for Research in Ecology and the Environment (ATREE).

ATREE also tweeted about this.

"We have named this new species as Georissa mawsmaiensis after this limestone cave, Mawsmai. We collected the snails on the moist limestone rocks, 4-5 m inside the cave entrance. However, at present, we don't know whether our species is a true cave species or not," Mr Das and Mr Aravind told PTI in email interactions.

A member of the same group (genus), 'Georissa saritta', was discovered 170 years ago in the same area.

The two scientists said their species was a little bit different from Georissa sarrita which was documented in 1851 by WH Benson, a civil servant in British India and an amateur malacologist (who studies shell-less invertebrates).

The new species is different in shell size compared to the earlier one. Besides, it has four very prominent spiral striations on body whorls of the shell compared to seven in Georissa sarrita.

Until now, five snail species have been found from the caves of Meghalaya and there could be more, they said.

However, Meghalaya is famous for its caves and the two scientists are concerned that tourist footfalls could affect the ecology of the area.

"The cave has a very unique environment that can harbour unique faunal diversity. There are several studies on cave biodiversity in Southeast Asian countries and other parts of the world, which reported various animals including snails, but very few studies are there from Indian caves," the two said.

These caves are very sensitive to change in environmental conditions resulting from anthropogenic activities such as mining and cave tourism, causing negative impacts on animals living inside them.

Mawsmai cave is one of the major tourist attractions of Sohra, erstwhile Cherrapunji. Lately, artificial lights and cemented floor and steps have been added inside to make it more "tourist-friendly".

"Suffering During Partition Should Not Be Forgotten": RSS Chief Mohan Bhagwat