After the reshuffle, the union cabinet now has 78 of a maximum of 81 members, including PM Modi

A day after the reboot of the union cabinet, a number of newly appointed ministers took charge of their assignments, including Mansukh Mandaviya - the new Health Minister, Ashwini Vaishnaw - the new Railways and IT Minister, RK Singh - the new Power Minister, and Anurag Thakur - the new Information and Broadcasting Minister and Kiren Rijiju, the new Law Minister.

Visuals from news agency ANI showed Mr Mandaviya - wtith a face mask - being greeted at the offices of the Ministry of Health and Family Welfare.

Mr Mandaviya - who will also head the Chemicals and Fertilizers ministry - takes charge at a critical time in the government's fight against COVID-19. India has seen off a devastating second wave of Covid infections and is scrambling to scale up vaccinations ahead of a potential third wave.

"I have been given a responsibility by the Prime Minister and I will try my best to fulfil his expectations," he told ANI.

Over the past week he also visited the facilities of three Covid vaccine manufacturers in the country - Serum Institute in Pune, Zydus and a Bharat Biotech facility producing Covaxin in Ahmedabad.

Mr Mandaviya's deputy, Dr Bharti Pravin Pawar, also took charge of her role. She told ANI: "... efforts are (being) made towards betterment (of existing health infrastructure). We will work for betterment of rural areas. I believe everyone will be happy". 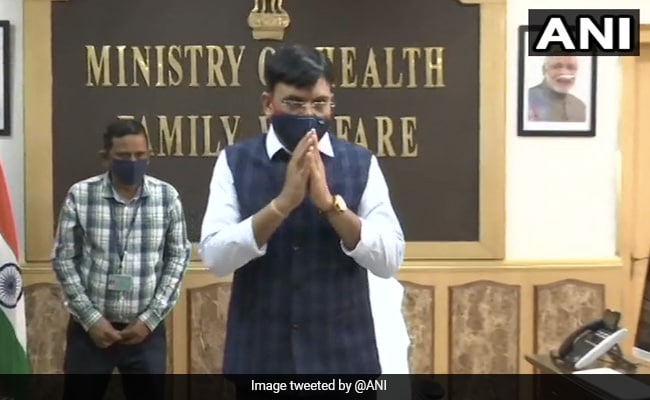 In a short video shared by ANI, Ashwini Vaishnaw - who faces the daunting task of heading two of the more high-profile ministries - can be seen seated at his new office at Rail Bhawan (Indian Railways' head office) in Delhi and interacting with his officers.

"Took charge as Cabinet Minister of Railways today. Once again, from the core of my heart, I extend my gratitude to Hon'ble PM Narendra Modiji for entrusting me this responsibility," he tweeted.

Took charge as Cabinet Minister of Railways today. Once again from the core of my heart, I extend my gratitude to Hon'ble PM @narendramodi ji for entrusting me this responsibility.@RailMinIndiapic.twitter.com/OvhRwVHFNX

"Indian Railways is a major part of PM Modi's vision. His vision for the railways is to transform the lives of the people... that everyone - common man, farmers and the poor - get the benefits. I will work for that vision," Mr Vaishnaw told reporters this morning.

Heading the Railways ministry will be a stern test of Mr Vaishnaw's management skills; not only is it one of the largest rail networks in the world, it employs lakhs of men and women and is a key component of the Indian economy, carrying over 112 million tonnes of freight in June alone.

Mr Vaishnaw - who holds an MBA from Wharton and and MTech from IIT (Kanpur) - will also have to oversee 126 'critical' and 'super critical' projects that are worth a combined Rs 1,15,000 crore. 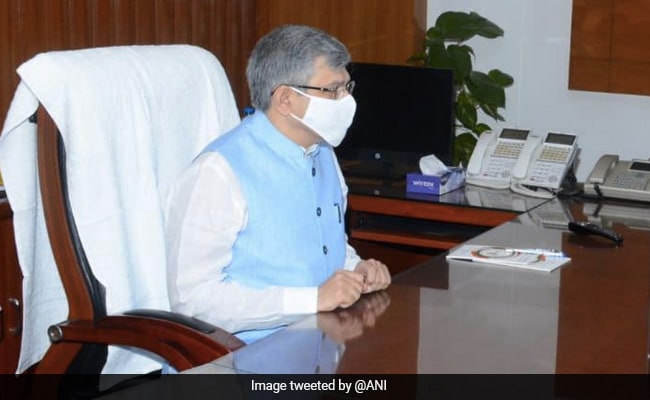 Ashwini Vaishnaw takes charge as the new IT Minister

The ministry was earlier headed by Piyush Goyal, who will now lead the ministries of Commerce and Industry, Consumer Affairs, Food and Public Distribution, and Textiles.

Later in the day Mr Vaishnaw sent a strong message to Twitter - with whom the government is locked in a row over compliance with the new IT rules.

Asked if he would take help from his predecessor - Ravi Shankar Prasad - Mr Rijiju, who had said he will be briefed by senior Law Ministry officials about pending matters, said: "It is always about team work... it is about a collective responsibility. Nothing happens alone."

Mr Rijiju, who was promoted from a junior minister rank, is a law graduate who earlier handled Youth Affairs and Sports. He represents the Arunachal Pradesh West constituency in the Lok Sabha. In other ANI visuals, Anurag Thakur and Meenakshi Lekhi could also be seen at their new offices.

Mr Thakur, who was formerly the junior Finance Minister, took charge at the I&B Ministry, which was previously led by Prakash Javadekar. Mr Javadekar, who was also the Environment Minister, was one of a handful of high-profile exits from Prime Minister Narendra Modi's cabinet.

"PM Modi has done terrific work in the last seven years to take India forward. The work done by people before me in the I&B Ministry and the responsibility given to me by the PM... I will try to meet those expectations," Mr Thakur told reporters.

Meenakshi Lekhi - a Lok Sabha MP from Delhi and a- also took charge of her new assignment - she will be the junior minister in the External Affairs and Culture ministries.

"Women have been given big responsibilities. People used to speak of women empowerment but PM Modi made it possible that the country is led by empowered women, who are provided recognition and given responsibility... this is praiseworthy," she told ANI. 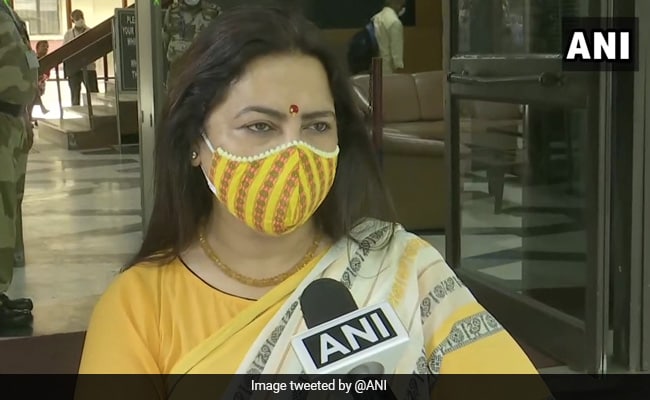 Dharmendra Pradhan, who was previously the Petroleum Minister, took charge as the Education, and Skill Development and Entrepreneurship Minister. Ex-Aviation Minister Hardeep Singh Puri, who replaces him as the Minister for Petroleum and Natural Gas, also assumed his new offices.

All new ministers are scheduled to meet BJP chief JP Nadda this evening at the party headquarters.

One of the BJP's high-profile acquisitions from the Congress, Jyotiraditya Scindia has been given charge of Civil Aviation at a time when the sector is struggling under the impact of COVID-19. The ministry was once handled by his father Madhavrao Scindia, who died in a plane crash in 2001.

Hardeep Singh Puri, who was previously the Civil Aviation Minister, is now the Minister of Petroleum and Natural Gas, and Housing and Urban Affairs.

Sarbananda Sonowal, who stepped aside as Assam Chief Minister so Himanta Biswa Sarma could be appointed, has been given Ports, Shipping and Waterways. He will also handle Ayush Ministry.

Union Home Minister Amit Shah has been given the newly-created Ministry of Cooperation.

"I congratulate all the colleagues who have taken oath today and wish them the very best for their ministerial tenure. We will continue working to fulfil aspirations of the people and build a strong and prosperous India," PM Modi tweeted yesterday after the oath-taking ceremony.

I congratulate all the colleagues who have taken oath today and wish them the very best for their ministerial tenure. We will continue working to fulfil aspirations of the people and build a strong and prosperous India. #Govt4Growthpic.twitter.com/AVz9vL77bO

4,300 Women In Ahmedabad To Get Gas Kits On PM's Birthday