The NCP chief reiterated that the decision of aligning with the BJP was that of his nephew Ajit Pawar and not of the NCP, while addressing reporters near Satara district. 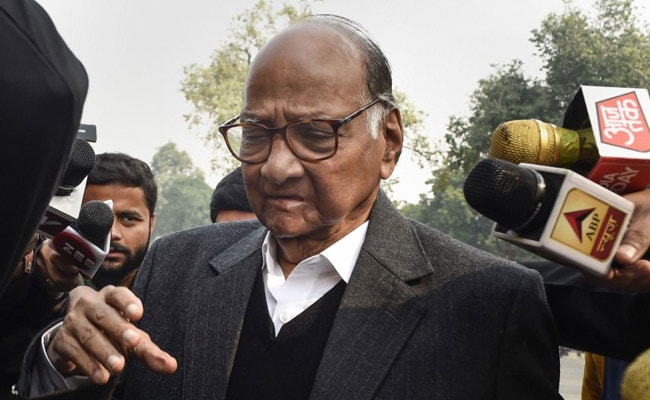 In order to run a government well for five years, discussions do take time: Sharad Pawar

NCP chief Sharad Pawar today said he was not behind Ajit Pawar's decision to align with the BJP and become the deputy chief minister, and asserted that his party along with Congress and Shiv Sena will form the next government in Maharashtra.

The NCP chief reiterated that the decision of aligning with the BJP was that of his nephew Ajit Pawar and not of the NCP, while addressing reporters in Karad town of neighbouring Satara district.

"It is not the party's decision and we do not endorse it," Mr Pawar said. "It is wrong to say that I have a hand behind Ajit Pawar's revolt," he added.

Asked whether the NCP, Congress and Shiv Sena will form government in the state, he said, "There is not an iota of doubt that the government (of the combine) will be formed in Maharashtra."

He said meetings of the Shiv Sena, Congress and NCP were taking place and senior leaders, including Ajit Pawar, attended them.

"All three parties were on the same page on forming the government together, but whatever he (Ajit Pawar) decided, it was his personal decision," the NCP chief said, adding that he had no contact with his nephew.

The veteran politician dismissed insinuations that he was behind the chain of events that started with his nephew walking out of the party and joining hands with the BJP to give the party a second shot at power in the state under Devendra Fadnavis.

"There is no question of my involvement in this...If I was involved, I would have told my colleagues," he asserted.

On reports that Ajit Pawar was fed up of the government formation talks between the three parties dragging, he said nobody had the right to take such decisions at a personal level, and any "difference of opinion" should have been put forth at the party meetings.

Asked whether Ajit Pawar was under pressure in view of the Enforcement Directorate's case (in connection with a bank scam) against him, the NCP chief said, "I have no idea".

He further said that the BJP's claim of being a party with a difference was hollow.

"The BJP used to say it is different from others. After this episode, their difference has been exposed," he said, asserting that the saffron party was misusing power and the gubernatorial post to achieve the desired goals.

On whether Ajit Pawar will be expelled from the NCP, he said the decision will be taken at the party-level.

Asked about the delay in government formation and multiple rounds of talks between the NCP, Sena and Congress, Sharad Pawar said if a government formed by three parties with different ideologies has to work for five years, then detailed discussions on a common minimum programme are essential.

"Sometimes the Sena's stand on a particular issue is different from the other two parties. In such scenarios, we have to keep contradicting issues aside and come together on issues that are of interest to people," he said.

In order to run a government well for five years, discussions do take time, he added.

In a dramatic turn of events, Devendra Fadnavis and Ajit Pawar were sworn in as chief minister and deputy chief minister respectively by Governor Bhagat Singh Koshyari at a hush hush ceremony on Saturday morning in Raj Bhavan, leading to the lifting of the President''s rule in the state.

The BJP was propped up by NCP''s Ajit Pawar, who revolted against his party.

"I have seen many such scenarios in my 50 years of political career. Difficulties come but they are temporary, and my experience is that people of the state stand strong," the NCP supremo said.

He said till the time he has the support of youngsters, he is not worried about anything. Earlier, Sharad Pawar paid tributes to the state's first chief minister Yashwantrao Chavan on his death anniversary at the latter's memorial ''Pritisangam'' in Karad.

Notably, Ajit Pawar sat on a day-long fast at Chavan's memorial in April 2013 after some of his remarks on the then drought situation in the state stoked a controversy.