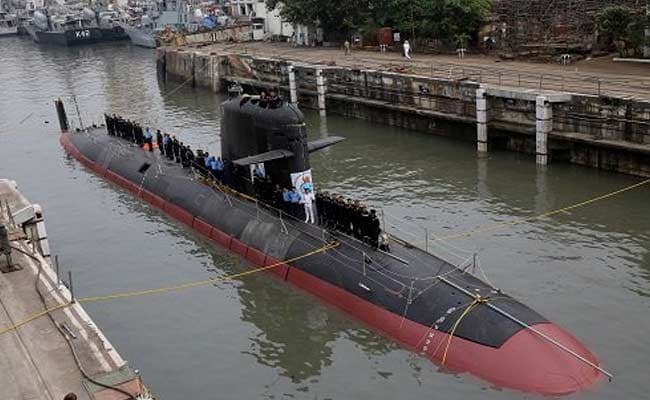 The weapon was fired from the first of India's six Scorpene-class submarines. (File photo)

New Delhi: In what can be termed as the Indian Navy's significant milestone in enhancing its "sub-surface" warfare prowess, an anti-ship missile was today successfully test-fired for the first time from an indigenously built Kalvari class submarine.

The weapon was fired from the submarine, the first of India's six Scorpene-class submarines built under the Project 75, and it "successfully hit" a surface target during the trial in the Arabian Sea.

All the six diesel-electric attack submarines will be equipped with the anti-ship missile, which has a proven record in combat, the defence ministry said, noting these missiles would provide the vessels the ability to neutralise surface threats at extended ranges.

"The missile successfully hit a surface target at an extended range during the trial firing.

"This missile launch is a significant milestone, not only for the Kalvari, which is the first in a series of Scorpene-class submarines being built in India, but also in enhancing the Indian Navy's sub-surface warfare capability," the ministry said in a statement.

The submarines, designed by French naval defence and energy company DCNS, are being built by Mazagon Dock Limited in Mumbai.

The Kalvari class submarine has superior stealth and can use guided weapons such as torpedoes and tube-launched anti-ship missiles on enemy subs from the surface or underwater.  Besides warfare, its varied functions will include intelligence gathering, mine laying and area surveillance etc.

Promoted
Listen to the latest songs, only on JioSaavn.com
The second Kalvari class submarine was launched in Mumbai in January this year in the presence of Union Minister of State for Defence Subhash Bhamre.

Six such Scorpene-class submarines are being built in Mumbai as part of the government's extensive plans to modernize the Indian Navy.