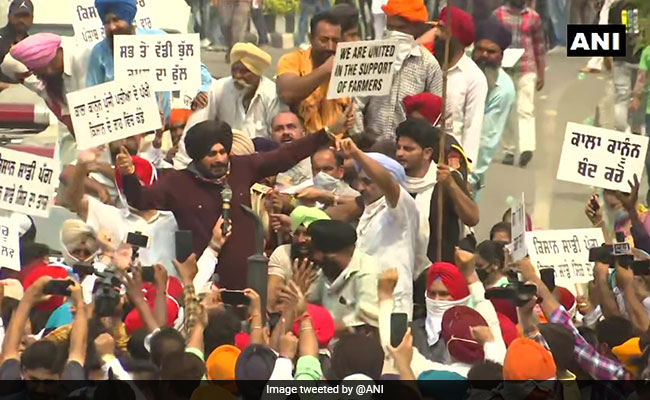 Congress leader Navjot Singh Sidhu on Wednesday joined the party's protest in Amritsar in support of farmers who were demonstrating the passage of agricultural reform bills in the parliament.

Visuals from the demonstration showed Mr Sidhu atop a vehicle with posters in support of the farmers.

Congress leaders Rahul Gandhi and Priyanka Gandhi have slammed the Modi government over these bills.

According to the Centre, these bills will help small and marginal farms by allowing them to sell produce outside mandis and sign agreements with agri-business firms; and doing away with stock-holding limits on key commodities

The Farmer's Produce Trade and Commerce (Promotion and Facilitation) Bill, 2020 and the Farmers (Empowerment and Protection) Agreement of Price Assurance and Farm Services Bill, 2020, which was passed by the Upper House through voice vote despite objection from opposition parties.

"Till We Get Vaccine, Can't Be Complacent": PM Modi's Top Quotes