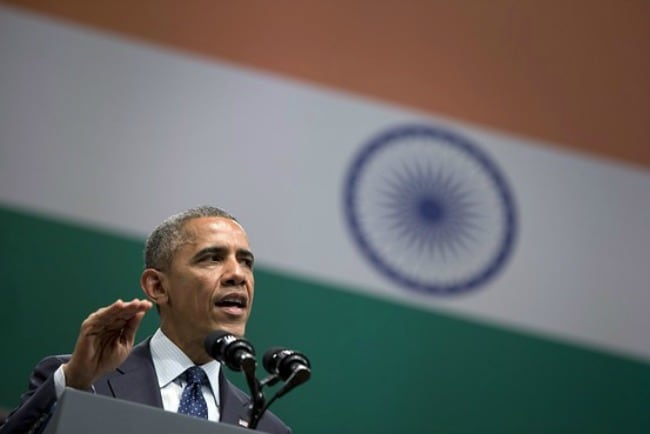 New Delhi: US President Barack Obama today said the sight of "incredible" Indian women in the Armed forces was one of his "favourite things" on his India visit as he stressed that nations become successful when their women make progress.

Obama made the remark while lauding the role played by Indian women in various spheres of life in his address to a select audience of youngsters in New Delhi, many of them females.

The President, who wound up this three-day visit to India with this speech, referred to the presence of women defence officers in India.

"One of the favourite things on this trip for me has been to see all these incredible Indian women in the Armed forces including the person who commanded the guard that greeted me when I arrived (at Rashtrapati Bhavan). It's remarkable. It is a sign of great strength and progress," he said amidst a thunderous applause from the crowd and his wife Michelle who accompanied him to the venue at Siri Fort auditorium.

The defence forces, in a first, chose women officers to lead their marching contingents during the Republic Day parade in New Delhi on January 26. Wing Commander Pooja Thakur of the Indian Air Force led the Guard of Honour at the Rashtrapati Bhavan when Obama was accorded a ceremonial welcome last Saturday.

"In India, women have shown that they can succeed in every field including government where many of your leaders are women. The young women, like present here, are playing their part in India's progress.

Promoted
Listen to the latest songs, only on JioSaavn.com
"We know from experience that nations are successful when their women are successful. When girls go to school...this is one of the most direct measures of whether a nation is going to develop perfectly...and how it treats its women," Obama said.

He urged men, in all forms of relation to a women, to ensure that the fairer sex are ensured their freedom and right.

"It is as husbands and fathers and brothers that we have to step up because every girl's life matters and every daughter deserves the same chances as our sons and every woman should be able to go about her day, to walk the street and ride the bus and be safe and treated with respect and dignity she deserves," he said.