In his opening address at dialogue on the "Role of Ulema in fostering a culture of Interfaith Peace and Social Harmony in India and Indonesia", Ajit Doval said we need to work together to develop common narratives on deradicalisation. 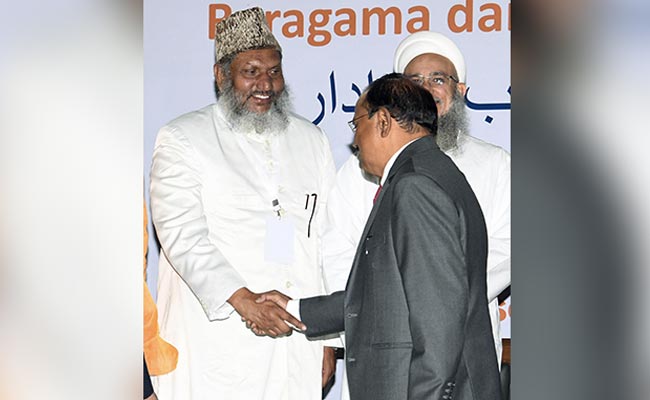 NSA Ajit Doval said Ulema have a key role to play in fighting terrorism and extremism.

Ulema have a leading role in educating the people on the original tolerant and moderate principles of Islam and countering extremism with progressive ideas and thought, National Security Adviser Ajit Doval said today.

In his opening address at dialogue on the "Role of Ulema in fostering a culture of Interfaith Peace and Social Harmony in India and Indonesia", Ajit Doval said we need to work together to develop common narratives on deradicalisation.

A delegation of Ulema and representatives of other religions has come here with Indonesia's Coordinating Minister for Political, Legal and Security Affairs, Mohammad Mahfud MD.

The Ulema held a day-long dialogue with their Indian counterparts and other religious leaders at India Islamic Cultural Centre on varied topics.

In his opening address, Ajit Doval said, "Extremism and terrorism are against the very meaning of Islam because Islam means peace and well-being (Salamati/Asalaam)."

"In a democracy, there is no place for hate speech, prejudice, propaganda, demonisation, violence, conflict and misuse of religion for narrow ends," he said.

Underlining that both India and Indonesia have been victims of terrorism and separatism, Mr Doval said while the challenges have been overcome to a considerable extent, the phenomenon of cross-border and ISIS-inspired terrorism continue to pose a threat.

"Cooperation of the civil society is essential in countering the threat from ISIS-inspired individual terror cells and returnees from theatres like Syria and Afghanistan," he said.

He said the essence lies in disseminating our positive discourse far and wide and not merely reacting to the agenda set by inimical forces.

"State institutions also need to come together in detecting and identifying potential negative influencers and share information to counter their activities. In this, Ulemas, due to their deep connect with civil society, can play a vital role," he said.

He said the Ulema have a leading role in "educating the people on the original tolerant and moderate principles of Islam and countering radicalisation and extremism with progressive ideas and thought".

"Our youth should receive special attention towards this end. They are often the primary target of radicalisation, but if their energies are nurtured in the right direction, they can emerge as harbingers of change and building blocks of progress in any society," he said.

Ajit Doval said the Ulema must also be adept in the use of technology and use it to thwart propaganda and hate.

He said against the backdrop of tectonic shifts in the global order, India and Indonesia, given their rich history, diversity, shared traditions and increasing bilateralism, have the potential to enhance prospects of peace, regional cooperation and prosperity in Asia.

"Countries like India and Indonesia, with their experience of multi faith harmony and coexistence, can send a joint message to the world to eschew violence and conflict. This will be a powerful symbol of the determination of two large countries (together we have 1.7 Billion of the world population) to preserve and promote the true values espoused by religion," he said.

Ajit Doval said that together we should strive to propagate the moderate virtues of Islam as a beacon of hope and cooperation for the entire world.

In his keynote address, visiting minister Mahfud MD, NSA's counterpart in Indonesia, said we have many times witnessed people who use their religion as a doctrine of absolute truth and are quick to blame others.

"We have to go out of this and improve. Religion, I think, should be a source of peace, not the reason for discord, conflict, or violence. Religion should be a unifying tool, not a divisive instrument," he said.

"Where are religions when the world fights against all these common concerns?," he said.