Narendra Modi takes on China over its 'mindset of expansionism' 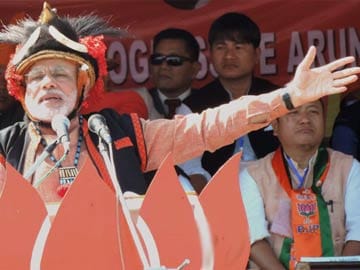 "No power on earth can snatch away Arunachal Pradesh," Mr Modi, donning Arunachal Pradesh's traditional headdress and jacket, was shown on television saying on a campaign stop to the state.

China questions India's claim to the territory and calls it South Tibet.

India and China had fought a brief border war in 1962. The nuclear-armed neighbours had signed a pact in October to ensure that differences on their shared border do not spark a confrontation.

Promoted
Listen to the latest songs, only on JioSaavn.com
President Pranab Mukherjee described Arunachal Pradesh as an integral part of the country on a visit last November, sparking a heated exchange. China urged India not to aggravate problems on their shared border.

Last May, the two armies were locked in a three-week standoff in the western Himalayas after Chinese troops set up a camp at least 10 kilometres inside the Indian territory, triggering a public outcry and calls that India should stand up to its powerful neighbour.
© Thomson Reuters 2014
Comments
Narendra ModiChinaArunachal PradeshBJPmindset of expansion