Narendra Modi on Article 370: a BJP denial and a strategy 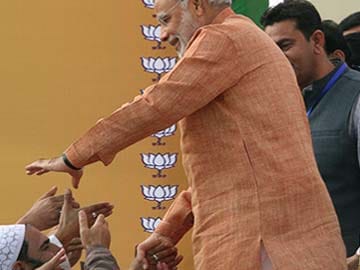 Narendra Modi at the Jammu rally on Sunday.

New Delhi: Narendra Modi's suggestion that the benefits of Article 370 in Jammu and Kashmir be debated has caused a political storm. Senior BJP leader Sushma Swaraj has clarified that the party is not "going soft" on the issue.

A stand the 63-year-old leader repeated with a tweet today, "Glad that after my call for a debate on Article 370, it is being widely debated among people & across TV, social media. However, we need rational & focused debate not only on 370 but other issues relating to J&K, including suffering of sections of J&K society."

The BJP prime ministerial candidate's speech seemed to suggest a significant shift and dilution in the BJP's stand. The Congress' Manish Tewari tweeted, "Is the turnaround on 370 final nail in the legacy of Vajpayee ji & Advani ji?" (Read: Who said what)

Sushma Swaraj said today, "It is wrong to say that the BJP has gone soft on Article 370. Modi has just asked if there has been any benefit from 370."

For several decades now the party has been shrill in its demand that Article 370, which grants special autonomous status to Jammu and Kashmir, be scrapped. It has been a key political agenda for the BJP's ideological mentor the Rashtriya Swayamsevak Sangh or RSS; rivals have attacked it.

The BJP manifesto for the 2004 general elections had no reference to Article 370. But in 2009, the BJP's manifesto said, "Article 370 poses a psychological barrier for the full integration of the people of Jammu & Kashmir with the national mainstream. The BJP remains committed to the abrogation of this Article"

Party insiders say the party has now tempered the shrillness, but its stand remains the same.

Promoted
Listen to the latest songs, only on JioSaavn.com
Scrapping Article 370 will be a politically sensitive move and will require massive numerical backing in Parliament. But, said one senior party leader, the BJP could not have skipped a mention of Article 370 as it attempts to galvanize its cadres in the state.

It was for the first time since he began campaigning for the 2014 general elections that Mr Modi has raised an issue close to the RSS's heart. In his many elections speeches, he has steered clear so far of other such issues like the Ram temple and a Uniform Civil Code, as he makes a pitch on the promise of development.